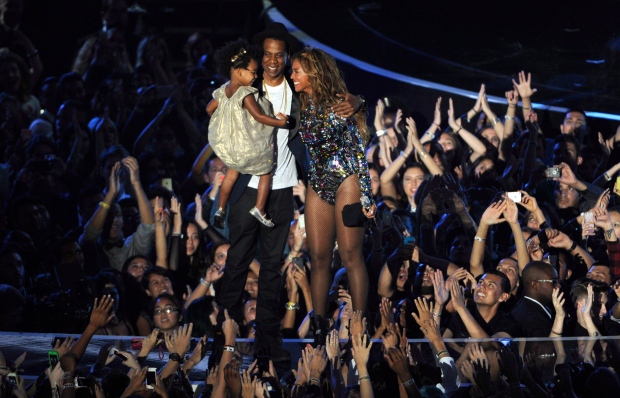 Celebrities may have cornered the market on unconventional baby names like Blue Ivy and North West, but a Swiss branding company is offering help to parents seeking unique monikers for newborns — for a significant price. Beyonce is shown on stage hugging Jay Z and their daughter Blue Ivy as she accepts the Video Vanguard Award at the MTV Video Music Awards at The Forum on Sunday, Aug. 24, 2014, in Inglewood, Calif. THE CANADIAN PRESS/Chris Pizzello/Invision/AP

Celebrities may have cornered the market on unconventional baby names like Blue Ivy and North West, but a Swiss branding company is offering help to parents seeking unique monikers for newborns -- for a significant price.

CEO and owner Marc Hauser said the process works similarly to trademark naming with around 100 hours devoted to its creation and research.

"I think it's very difficult to create a really fitting name, a name that fits to your family's background, to your cultural background ... that also fits with your sister's name and your family name," Hauser said in a phone interview, noting they've had inquiries from Pakistan, Singapore, South Korea and the U.S.

"We're looking for a really nice sound of the name and a good feeling for the name because we're creating a mythology and a history around the name as well."

For parents choosing from among existing names, some are still seeking outside counsel for guidance.

Sherri Suzanne, founder of My Name for Life, consulted in New York strictly by referral for 20 years before turning her focus to worldwide clientele online.

Phone interviews and customized email questionnaires are designed to elicit parents' style preferences, name parameters and to uncover any anxiety they may have about naming, she noted.

Following the initial consultation and ongoing correspondence with clients, she'll handpick name suggestions with considerations given to working within cultural, religious and language boundaries. The process can run several hundred dollars.

"Some clients know right from the start that they want assistance," said Suzanne.

"Some have struggled with the name of an older child and want a better experience with their next child. Others are just anxious to begin the naming process and want a partner to make their search more exciting and to help uncover names they would not have thought of."

Suzanne said a challenge for some in settling on a name is the fear of making a long-lasting mistake -- or having friends or family think they have. Her goal is to help alleviate their stress.

"I sometimes equate it to a real estate broker who will bring you to the house that might be perfect for you even though you can probably find the house yourself."

Duana Taha, writer of the Name Nerd column on LaineyGossip.com, offers her opinion on celebrity baby names and also receives letters from parents seeking guidance on newborn monikers. In addition to giving advice on potential names, she suggests alternatives.

Taha said she sees her role as a "complete stranger" in the process as key.

"They really appreciate that there's somebody that's judging based only on the merits of the name and that they get to tell their story in its entirety without somebody saying you also have to pay tribute to Great-Aunt Margaret."

Taha said the wealth of naming resources can also be overwhelming for individuals unsure of where to start.

"It's not as simple as finding a name that is phonetically pleasing for a child. You also want to have a name that kind of signifies how you feel about them or how you want them to feel."

Taha said it's a "really cool feeling" to play a role in the process, adding that the best part is the thoughtfulness invested in the name the child carries.

"That doesn't mean the most unusual name in the world. It just means something that I think everybody really cared about and cared for when they were choosing to give it to this child."

Suzanne said knowing she has helped in some way in naming children is "enormously exciting" and that parents who seek her help take the responsibility seriously.

"Nobody ever comes to me just to throw the task onto someone else -- that's kind of a myth about naming consultants. ...

"Every parent that comes to me is hyper vigilant and they want to do a good job."