'Deceitfulness and suavity:' Research confirms cats are hard to read 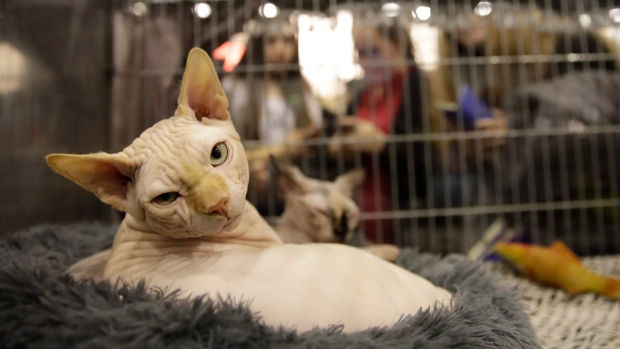 Jarret, a Sphinx cat, sits in its cage during a cat show in Rome, Saturday, Nov. 16, 2019. (AP Photo/Alessandra Tarantino)

“Cats are quite hard to read,” said Georgia Mason, a behavioural biologist whose recently published paper digs into the age-old question: What is my cat thinking?

“Cats are a bit overlooked and underappreciated,” she said.

“We thought maybe it's because they are a bit tougher to read, so let's see what's going on with their faces.”

Mason and her colleagues at the University of Guelph found abundant research material among the uncounted thousands of cat videos on YouTube.

They chose videos in which it was clear whether the cat was having a positive or negative experience - if it was advancing to its human, for example, or being blocked from something by a closed door. They edited each video down to a few seconds and cropped almost everything else out except for the cat's face.

“It was hard to find videos that met our strict criteria.”

They eventually produced a list of 20 video clips. Mason's own cats, Sylvie and Luke, both made the cut.

Then came the easy part. The team put the clips on the Internet, with a question beneath asking if the cat was happy, unhappy, or simply inscrutable.

Most were from Canada, but 85 countries were represented.

In the end, 6,300 responses were analyzed. The average score was less than 12 out of 20 - not much better than chance.

“I went into this pretty sure I was going to be great,” Mason said. “But being a cat lover is not enough.”

There were, however, a select few - about 13 per cent - who consistently scored upwards of 15 out of 20. They tended to be either female, young, or both - or were professional veterinarians.

Mason theorizes that women, for whatever reason, tend to be better at reading facial expressions. Vets simply see a lot of cats and learn to figure them out.

Apart from its intrinsic interest, the work is part of a rapidly growing field of research into animal emotion and how that is expressed, Mason said. It may help out cats as well.

Cats are almost as popular as dogs as household pets. Owners, however, seem less attached to them.

Mason points out that animal shelters report people are much more likely to turn in a cat than a dog. Cats are harder to adopt, too.

Maybe that's because we don't understand them as well.

As a result, she suggests, “People just get rid of their cats more easily.”

To help create a more canine bond, one of Mason's colleagues is using the findings to develop a training tool to help prospective cat people understand what their companions are telling them.

“You can say ... 'Look at the tilt of the eyes. Look at the gap between the nose and the mouth.”'

No training tool is ever likely to completely unlock their mystery, aptly expressed by the poet T.S. Eliot:

“There's no one like Macavity, There never was a Cat of such deceitfulness and suavity.” 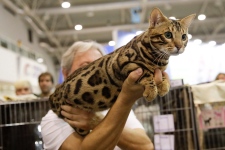 Attila, a Bengala Brown spotted is shown to the public during a cat show in Rome, Saturday, Nov. 16, 2019. (AP Photo/Alessandra Tarantino)

A judge observes a cat, during a cat show in Rome, Saturday, Nov. 16, 2019. (AP Photo/Alessandra Tarantino)