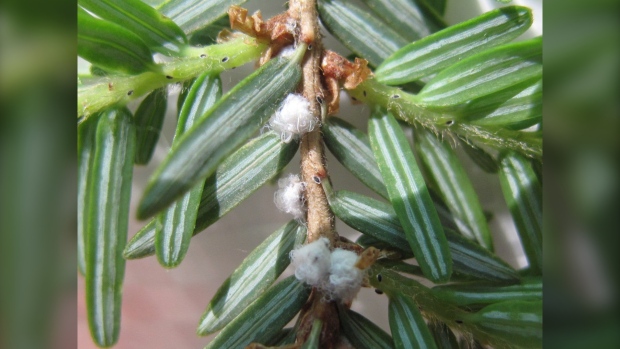 An outbreak of hemlock woolly adelgid – an invasive, aphid-like insect species that kill hemlock trees by sucking sap from the base of their needles – has been discovered near Cobourg, Ont. THE CANADIAN PRESS/HO-Ontario Ministry of Natural Resources and Forestry

Researchers have discovered an invasive insect infestation near Cobourg, Ont., which they say could have a detrimental effect on hemlock trees essential to their ecosystems and used in certain wood products.

Scientists with Natural Resources Canada's Canadian Forest Service accidentally discovered the outbreak of hemlock woolly adelgid, which they say had gone undetected for some time, this summer while collecting data on hemlock trees in southern Ontario.

Chris MacQuarrie, a research scientist with Natural Resources Canada, says the Cobourg finding is concerning because it's much deeper in Ontario than the only other known active population of the species in the Niagara region.

"That's hundreds of kilometres away from other places where we know the insect is," said MacQuarrie. "We think it's been there for quite a while because it was fairly large and rather easy to see, and it has already started to kill trees."

Hemlock woolly adelgid are aphid-like insects that attack hemlock trees by sucking sap from the base of their needles, draining the trees of their energy and killing them. Their egg sacks look like cotton balls or clumps of snow, making them hard to detect.

HWA pose no threat to humans but are highly destructive to hemlock trees, which are used for firewood, timber and other wood products. Hemlock trees are also indicators of a healthy forest, offer shading for aquatic ecosystems in streams, help deer navigate their trails in the winter by blocking snow and are scenic fixtures in Ontario's cottage country.

MacQuarrie noted the find is fairly close to an area where the abundance of hemlock trees starts to become evident.

He said there were a large number of dead hemlock trees in the surrounding area, indicating the bug has been present there for years, since it usually takes the species between four and six years to kill a tree and they may have spread beyond the infested zone.

The invasive species can be spread by wind, animals and human movement of nursery stock, logs, firewood and other wood products. MacQuarrie said the infestation was likely spread to some parts of Ontario and Nova Scotia by birds.

"In those places, especially in southern Nova Scotia, it's killed a fair number of trees," he said. "It went undetected for a while so it had a chance to build up."

The bugs were likely introduced to North America in the 1950s from Japan through infested nursery stock, according to the Invasive Species Centre. It was first discovered in Virginia in the '50s and has been spreading along the eastern seaboard of the continent since then, the Sault St. Marie-based non-profit wrote on its website.

A factor that contributes to HWA's ability to invade is the fact that it reproduces asexually for most of its life cycle, said MacQuarrie. All that is needed to establish a population is one female.

"So you have a small insect that's hard to find and doesn't need to mate to reproduce. Those are conditions for building up the population really quickly," he said.

MacQuarrie said the insect reached Canada a number of times in the early 2010s when it was accidentally introduced on horticulture trees, but populations were later discovered in southern Nova Scotia in 2018 and in the Niagara region of Ontario in 2019.

"We can look to the eastern seaboard of the U.S. and southern Nova Scotia for examples. Those are places where the insect has been for a bit longer and where there's a fair amount of hemlock," he said. "In that area there's been a lot of tree mortality."

Following the discovery of the Cobourg outbreak, the Canadian Food Inspection Agency will survey the surrounding area to detect any other infestations, according to MacQuarrie. He said anyone who spots HWA should contact the CFIA for confirmation and handling.

This report by The Canadian Press was first published Sept. 5, 2022.