Jenga, Masters of the Universe, My Little Pony up for Toy Hall of Fame 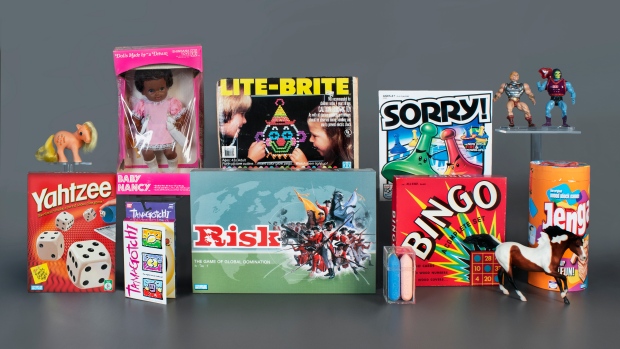 This Aug. 25, 2020 photo provided by the The Strong museum in Rochester, N.Y., shows the 12 toys that are up for induction to the the National Toy Hall of Fame later this year. From top left are My Little Pony, Baby Nancy, Lite-Brite, Sorry and Masters of the Universe. From bottom left are Yhatzee, Tamagotchi, Risk, sidewalk chalk, Bingo, Jenga and Breyer Horses. (Victoria Gray/The Strong museum via AP)

ROCHESTER, N.Y. - Breyer Horses and My Little Pony are neck-and-neck in the race to the National Toy Hall of Fame, making the list of 12 finalists for the Class of 2020, announced Wednesday.

Baby Nancy, an ethnically correct Black doll unlike those produced before her debut in 1968, is also up for the honour. The games Risk, Sorry, Yahtzee, bingo and Jenga also made the list, which is rounded out by Lite-Brite, Masters of the Universe, sidewalk chalk and the 1990s virtual pet, Tamagotchi.

Three of the finalists will be inducted into the hall Nov. 5.

“These 12 toys represent the wide scope of playthings - from simple sidewalk chalk that has its roots in ancient times, to Baby Nancy, which proved a turning point in the representation of race in dolls, to the more recent, highly innovative Tamagotchi,” Christopher Bensch, vice-president for collections, said in a news release.

Bensch said all the nominees have influenced how people play, one of the key criteria for earning a spot in the hall of fame alongside icons from the jack-in-the-box to the cardboard box, both inducted in 2005.

Honorees also must have lasted through generations, have reached icon-status, and foster learning, creativity or discovery through play.

A national selection committee casts ballots for the winners. Members of the public, who submit nominations all year, can also weigh in on the final selection through an online “Player's Choice” ballot from Sept. 9-16.

This will be the 23rd class to be inducted into the museum, which is located inside the Strong museum in Rochester, New York.

More about the nominees, according to the Strong:

- Bingo: a staple of fundraisers for churches and charities that descended from a lottery game first played in Italy around 1530.

- Breyer Horses: collectibles produced by the Breyer Molding Co. for the past 70 years.

- Jenga: the stacking game created by Englishwoman Leslie Scott based on wooden blocks from her childhood in Africa. The name has Swahili roots.

- Lite-Brite: colorful plastic pegs are backlit when placed in a black background.

- Masters of the Universe: a Mattel-produced line of action figures led by He-Man and She-Ra.

- Risk: the war and strategy board game first published in the United States in 1959.

- Sidewalk chalk: the medium of masterpieces, as well as generations of driveway hopscotch games.

- Sorry: the board game that relies on cards, rather than dice, to move players' pawns from start to home.

- Tamagotchi: the palm-size digital pets considered a fad by some but credited with helping to shape the electronics toy market in the 1990s and early 2000s.

- Yahtzee: the dice game that maker Hasbro estimates is played by 100 million people on a regular basis.