Pokemon No: A roundup of notable Pokemon Go misfires 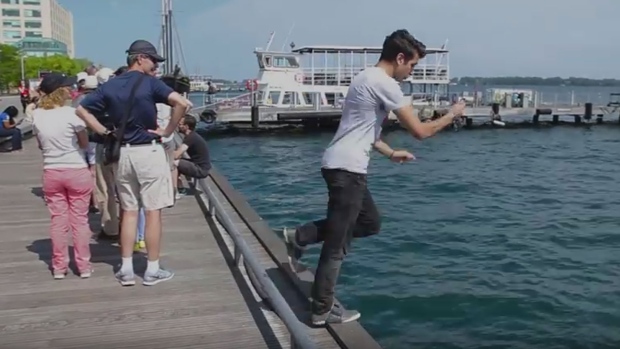 Comedian Mark Correia stumbles into Lake Ontario while looking for Pokemon in a still image from a YouTube video. (Noodle Boys/ YouTube)

Pokémon Go has taken the world by storm at a frighteningly fast pace, spreading like wildfire in every country where it has been released.

Since the game came out on July 6, it has already amassed more active users than Twitter and it’s still only available in a handful of countries.

However the highly addictive game, which overlays a virtual layer over the real world so that users can search their surroundings for Pokémon creatures, has also led to some odd – and sometimes dangerous – mishaps. Here’s a list of some of the top Pokémon Go mishaps so far:

The Toronto Transit Commission has warned people not to search for Pokémon creatures in the subway after a young man making a video about Pokémon Go walked along subway tracks at a busy station.  The TTC called the behaviour “unsafe” and “dangerous.” The comics who created the video have said they realize the stunt was “stupid.”

A Baltimore driver was lucky not to injure anyone when his vehicle slammed into a parked police cruiser while he was looking at the Pokémon app on his phone. The incident was captured on a body-worn camera and tweeted out by police.

#PokemonGO is not all fun and games. Here is a video of a distracted driver who struck one of our cars. #PlaySafe pic.twitter.com/kOTfbTcILo

The mother of a Burlington Toddler who died after falling from a window at his father’s home told The Toronto Star that she’s very upset that a plaque remembering her son has become a feature in the game. The plaque to Kevin Latimer somehow became a pokestop, a spot where Pokémon Go users can come to collect supplies needed to play. The mom has filed a complaint with the company, but in the meantime says Pokemon Go players should leave the memorial alone.

Saskatchewan’s correctional service says it is asking Pokémon users not to come near correctional facilities to look for Pokémon after users wandered too close to jails and youth detention facilities.

A man in Florida opened fire at two teens after he awoke in the middle of the night to find them playing Pokémon Go while parked in his driveway. No one was injured.

The craze around the game was laid bare when a horde of people abandoned their cars and stampeded into Central Park in New York City after a rare Vaporeon Pokémon was sighted.

Police in Manchester, New Hampshire caught the Pokémon craze when they announced that there was a rare Pokémon up for grabs in the station’s booking area. Police tagged more than 500 wanted fugitives in the post and invited them to come capture it. The post apparently didn’t net any arrests, but it did wrack up over 13,000 likes.

A Wyoming woman hoping to discover new Pokémon made a very different discovery when she found an actual dead body in a river while searching for the virtual creatures. Police said the man’s death appeared to be a case of accidental drowning.

Both the Auschwitz-Birkenau State Museum and the Washington Holocaust Museum have had to advise visitors that the sites are not appropriate spots to look for Pokémon creatures. Nearly 1.1 million people are believed to have perished at the hands of the Nazis at Auschwitz. A statement from the memorial said that playing the game at the site is “disrespectful on many levels.”

It might seem obvious to some that it’s poor taste to play video games in a cemetery. Still, a U.S. town in Georgia had to pass an ordinance banning internet or cellphone games at its cemeteries after numerous complaints about gamers traipsing through in search of Pokémon.

In New Jersey, firefighters had to rescue a woman who got stuck in a tree while searching for Pokémon in a cemetery.   Firefighters advised other Pokémon Go players to watch where they’re going.

12. Watch out for thieves

In two separate incidents in Ottawa and Belleville this week, a total of three Pokemon GO players were targeted by thieves who sought their cell phones as they played the game at night. 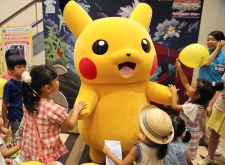 In this Monday, July 18, 2016 photo, a stuffed toy of Pikachu, a Pokemon character, is surrounded by children during a Pokemon festival in Tokyo. (AP Photo/Koji Sasahara)