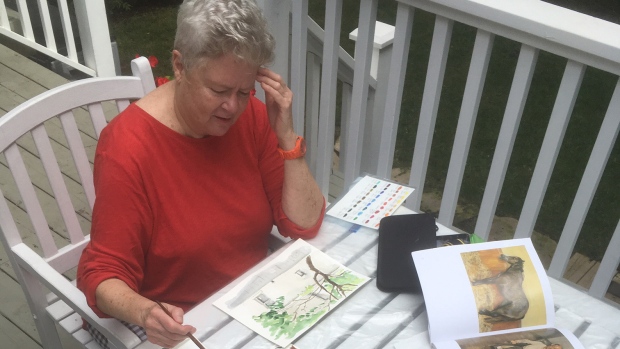 Sheila Carson works on a recent painting. The Deer Park artist has been drawing regular cartoons capturing life under the shutdown. (Submitted)

Zoom calls, anxiety, grocery hoarding and distanced conversations with friends have all unexpectedly become regular features of life in 2020 due to COVID-19.

While daily news and online discussions document this strange new reality daily, one Toronto artist has taken it upon herself to capture pandemic life in a series of evocative cartoons based on her life in the shutdown.

It was almost by accident that Sheila Carson discovered back in March that she could send quick little drawings along with her emails.

“I was attaching a photo to an email one day, which is about the extent of my computer (skills). I'm not on Facebook or anything like that,” Carson recalled in a recent interview with CP24.com. “I noticed in the copy line where it says ‘photo or video,’ at the end it said ‘insert drawing’ and I thought, ‘well, I wonder what the hell this is.’”

Carson quickly sketched out a photo of herself reading the paper and shot it off to her friend. Thus began a playful series of cartoons that have garnered a loyal following.

For months now, the Deer Park retiree has been sharing cartoon scenes of pandemic life with a growing circle of friends. Some depict online shopping, while others tackle mask-wearing and shut-down fatigue, her cat often making an appearance. 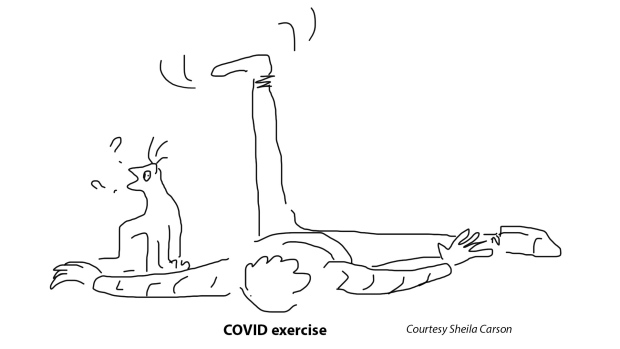 Eschewing the stylus in favour of using her fingers straight on the iPad – the technique gives the drawings “a little wiggle to them” – Carson developed a distinctive “everyman” aesthetic for the sketches.

She says she hasn’t been putting too much pressure on herself to produce, but sketches out the quick cartoons – each one takes two or three minutes – as she finds inspiration.

“They’re not scheduled, they’re an ‘as the spirit moves’ kind of thing,” Carson says. “You know, somebody might make a remark and then that kind of noodles around in my mind.” 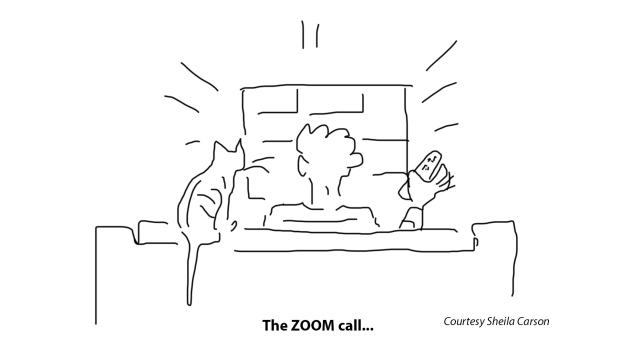 She adds that the simple, but expressive drawings have “been therapeutic for me to end.”

“My circle are now all looking forward to the next one. And they've been bugging me about ‘Oh, you have to make a little book. Oh, you have to send this to the New Yorker.’” 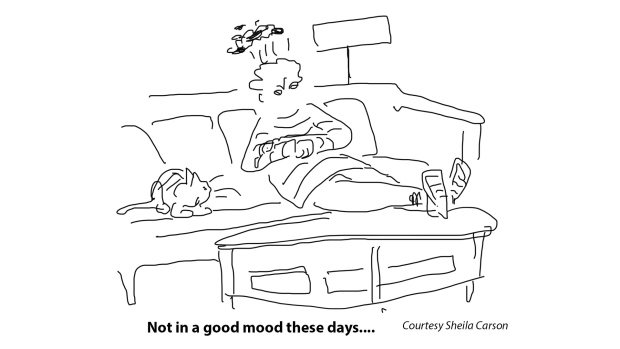 Having spent years in the corporate world, the now-76-year-old says she’s happy to be able to spend time doing what she loves – focusing on art, exercise and deep conversations with friends.

She says in part, she started doing the sketches back in March out of a sense of being “marooned.” Frustrated at not being able to go to her art classes, the cartoons offered some quick relief for her artistic impulses.

“I do have lots of things I enjoy doing at home, but I think in the first couple months for all of us, there was that hiatus where every single thing you decided to do, you had to think about how you're going to do it,” Carson says. “So, I was probably in that funk that a lot of people were and I really didn't feel inspired to get into my art in a big way, but a cartoon I could always do. And it was something quick. And it just expressed an idea quickly, an idea or a feeling that I had about the situation. With this tool, I could just do it right there on my iPad. It was so immediate.”

Overwhelmingly positive feedback from friends encouraged her to keep going.

“It seems that it really helped them and it seems with these, not only did they identify, but they got a big laugh out of it.”

Carson says she’s happy with providing her friends with their laugh of the day.

“Let's say it's a bubble of support – people and friends that I want to support and of course, it makes me feel good to have them enjoy,” she says. 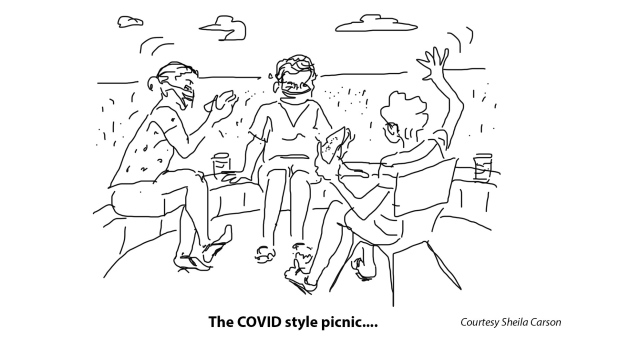 Still, with more than 75 cartoons now under her belt since the pandemic started, she is thinking of gathering them into a collection of sorts that she might try to publish.

“I'm not concerned about making mega bucks from it or anything like that,” she laughs. 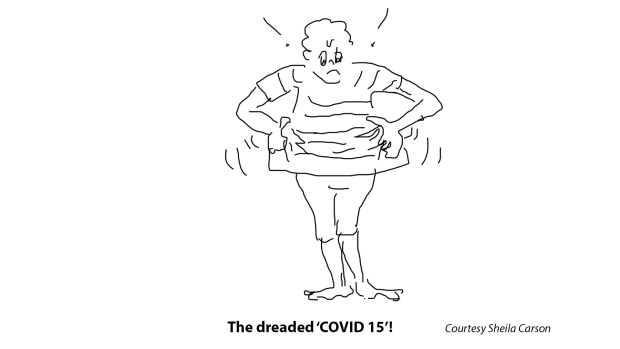 While the cartoons have been a fun outlet lately, Carson says she’s accustomed to picking up new hobbies.

“I started playing tennis when I was 43. I started a lot of things when I was in my 40s because it was kind of ‘if not now, when are you going to start doing it?’ And then after that yoga and then Pilates.”

Some of her more serious art has also been shown in local galleries, including a recent self-portrait currently on display at Gallery 1313 as part of an exhibition of pandemic self-portraits.

Carson says that self-portrait is a metaphor for the situation so many of us find ourselves in at the moment.

“Naked, isolated, muzzled, apprehensive, finding somehow the strength to go on, one day at a time,” she says. 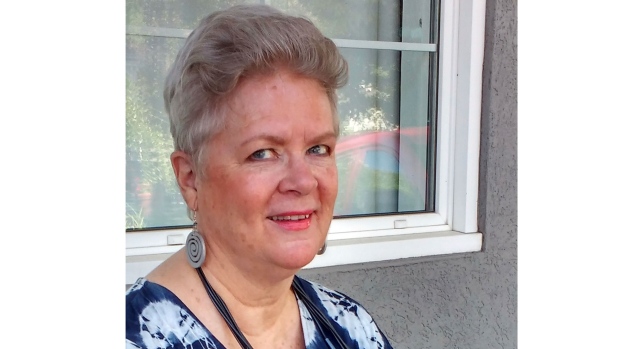 With a diverse set of interests, Carson says new literature on World War II is now taking up a lot of her time.

“Of course, a lot of things were not revealed, you know. There was a 50-year moratorium on any details. Now things are starting to come out and people are writing about them,” she says.

With history on her mind, Carson says the collection of cartoons might have some unexpected meaning to them.

“It would lend itself to a little diary of the time for sure, I think” Carson says. “And it doesn't seem like it's going to be going away anytime soon.” 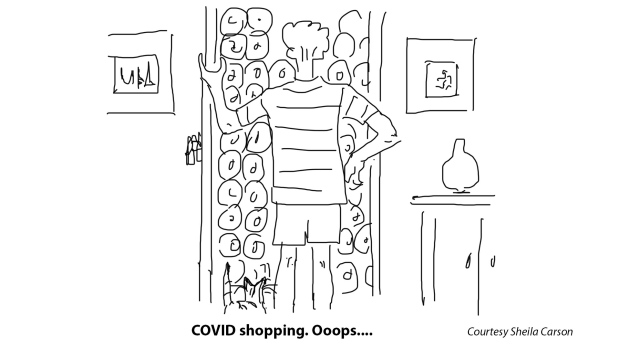