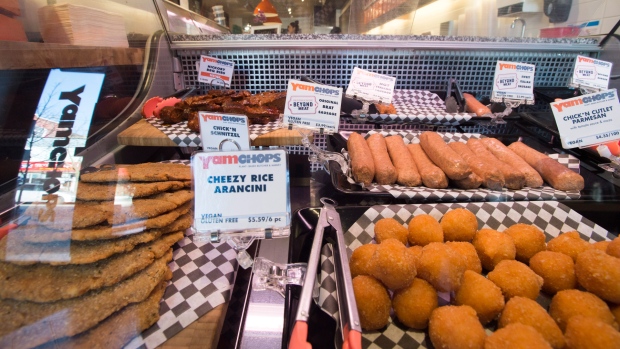 A display fridge is seen at Yamchops in Toronto on Tuesday, December 4, 2018. Julie Boyer and John Tashjian, co-owners of Yamchops in Toronto, said Canada's first plant-based butchery has seen attitudes change in the four years since its founding THE CANADIAN PRESS/Frank Gunn

Lauren Marshall can still smell the sweet and smoky aroma wafting through her childhood home as her mother baked a pineapple-glazed hickory ham in the oven for special occasions.

This holiday season, Marshall is serving up a version of her mother's recipe at her soon-to-open butcher shop, offering customers the satisfaction of their favourite savoury staples - minus the meat.

Real Fake Meats, set to open its doors in Halifax's north end this month, is one of a handful of plant-based butcheries across the country swapping beef cuts for beet-stained meat mimicries that vegans and barbecue lovers alike can sink their teeth into.

It may seem like a business model built on an oxymoron, but with research suggesting that Canadians are increasingly looking for alternatives to animal products, faux-meat artisans say plant-based delicacies are filling a void in vegan dining, and converting diets in the process.

Marshall spends hours in her kitchen tinkering with vegan variations on traditional fare that evoke the taste, texture, sight and smell of their carnivorous counterparts - that alchemy of sensations that reminds her of her mother's ham, but with a plant-based twist.

“I'm recreating a memory,” said Marshall. “You're already (reliving) that experience that you've had before, so your mind is already thinking it's eating ham.”

The Very Good Butchers in Victoria are exposing the “myth” that vegan fare is lacking in nutrition by slinging fillets, patties and links that in some cases are packed with more protein than their meat analogues, said co-founder Mitchell Scott.

“What we're trying to do is show that veganism doesn't just have to be about rabbit food,” Scott said. “You can still have all these familiar foods you enjoy, and you don't really have to sacrifice anything.

“You'll be full afterwards. You're not going to be raiding the refrigerator afterwards or anything.”

Some animal-rights activists have objected to plant-based proprietors calling themselves “butchers” over concerns that the word undermines the suffering of livestock sent to slaughter.

It's also a way to distinguish the quality of their products from the highly processed “plastic veggie sausages” that populate grocery aisles as industry players catch on to the rise of meatless eating, Scott said.

According to a recent report by researchers at Dalhousie University, Canadians are reducing their consumption of meat products in favour of plant-based proteins.

At the same time, fast food chains have started adding vegan and vegetarian options to their menus. A&W Food Services of Canada Inc. even temporarily sold out of its Beyond Meat patties shortly after adding them to its menu, and Scott said Very Good Butchers is facing a similar struggle on a smaller scale.

Since their start in farmers' markets, Scott said the tight-knit operation has struggled to keep up with demand for their plant-based delicacies. For the grand opening of their first retail location in early 2017, he said more than a thousand people lined up to check out their meatless offerings, which sold out so fast they had to shut down the store for a week to restock.

It's a challenge he said has dogged Very Good Butchers as they scaled up to a bigger space to expand their hot-food offerings, and through the launch of a faux-meat subscription service that ships across North America. Today, Scott said he has a hundred grocery stores on a waiting list to carry their products.

Scott hopes that the planned launch of a small production facility will help with the backlog of orders. He and his partners have also set their sights on opening a second location in Vancouver this summer he says, launching a crowdfunding campaign on an online investment platform that has raised nearly $450,000.

He attributes much of this success to the growing numbers who are factoring in health, environmental and ethical concerns around meat in their diets, estimating that about 40 per cent of the vegan butchery's clientele are omnivores.

Julie Boyer and John Tashjian, co-owners of Yamchops in Toronto, said Canada's first plant-based butchery has seen attitudes change in the four years since its founding, and perhaps in some ways, contributed to this shift.

By focusing on “centre-of-the-plate” fare like chickpea-based schnitzel, no-crab cakes and pulled-pork jackfruit, Boyer said YamChops offer “transition” foods that can help consumers make changes to their diet without disrespecting their taste buds.

It's not realistic to expect that all eaters would choose a hunk of tofu over a rib eye steak, said Tashjian, but when offered satisfying options, many people will incorporate meat alternatives into their diet.

“You can't just snap your fingers and change the entire way things people are used to, thousands of years of the way we've eaten food,” said Tashjian. “It's just a matter of being able to give people lifestyle changes, and I think that's a good start to the whole process.”