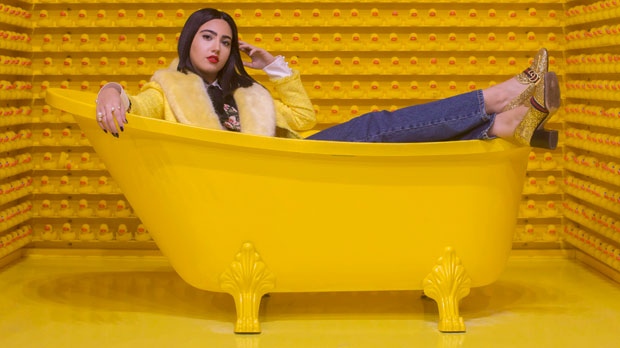 Instagram influencer Negin Tavana, whose page @Negzila has more than 35,000 followers, is pictured at the pop art installation "Happy Place" in Toronto, on Monday, October 29, 2018. THE CANADIAN PRESS/Chris Young

TORONTO -- Strike a pose with a giant chocolate chip cookie, slip into a pair of seven-foot high heels and cap it off with a plunge into a ball pit beneath an inflatable rainbow.

It's your moment to shine -- just make sure to smile big and get your Instagram loaded to capture every moment of curated joy.

This is the world of Happy Place, a temporary fun house of candy-coloured daydreams that runs in Toronto until January. For a price of about $33 a ticket, or nearly $40 on weekends, you gain access to a snapworthy playground for an hour before the next crowd moves in for their turn.

A steady flow of upbeat pop tunes pumping through the loud speakers blast away any chance of cracking a frown. It's hard to deny Whitney Houston's "I Wanna Dance With Somebody (Who Loves Me)" or Janet Jackson's "Together Again" when you're posing against a wall of stocked gumball machines.

Happy Place is the latest in a growing trend of "pop-up exhibits" designed to lure those hungry to feed their Instagram pages with eye-popping visuals -- collecting all the likes in return. Most of them are stocked with oversized props and awash with exaggerated colour palettes.

The concept exploded in popularity around parts of the United States several years ago, but Canada is only starting to welcome the idea of paying for elevated Instagrammable moments you can't replicate at home.

Earlier this year, the Art Gallery of Ontario's "Yayoi Kusama: Infinity Mirrors" exhibit packed crowds into six mirrored rooms for 20 to 30 seconds each, challenging each attendee to capture their best selfie in record time.

The event drew record numbers, and the kaleidoscope visuals quickly went from a wonderment to a cliche on Instagram weeks before its three-month run finished. That hasn't stopped the AGO from launching an online crowdfunding campaign Thursday to help purchase a $2-million permanent mirrored room at its gallery.

If you're not a heavy user of social media paying big bucks to install a room of mirrors might seem crazy -- but organizers at the AGO say it's worth the investment because it attracts people in hordes.

Happy Place is another sign that Instagram spaces aren't a joke. The exhibit arrives in Canada after selling out in Los Angeles and having a successful run in Chicago.

Jared Paul, founder of the company, is a veteran of the live concert industry and currently manages acts like New Kids on the Block. He sees these spaces as the next generation of entertainment, and rejects any suggestion they're self-indulgent extensions of social media culture.

He said spending time with his three young sons at Happy Place assured him they serve a purpose in getting visitors to interact with each other instead of scrolling through virtual worlds.

"I love that people have to lift their heads up from their phones and interact with the people they come with," he said.

While most Canadians might feel that galavanting in a confetti dome or posing in a yellow bathtub set against a wall of hundreds of rubber duckies sounds unique, the look of those installations could wear thin as quickly latest inspirational Insta-quote.

The Happy Place's upside down room is a perfect example, suggested popular Instagrammer Nevin Tavana as she walked around a bedroom that's flipped on its head so the bed and table cover the ceiling.

She said it's a visual trick that's become the new photo booth trend at some corporate parties.

"I've seen a lot of these kind of photos on my feed, so I'd want to do something different," she said as she walked past the space and into a room with fake flowers instead.

In New York, considered the epicentre of experimentation for "Instagram museums," the positivity around social media installations is starting to fray.

Last month, the Museum of Pizza faced a strong backlash for charging US$35 for tickets to a space that dedicated little effort to the history of the dish. Instead, the "museum" was focused on shareable visual elements like a "cheese cave" photo opportunity. The organizers threw in a free slice of pizza to sweeten the offer.

Human's Best Friend found a way to double-dip on ticket prices by charging both dogs and their owners separately to pose with pooch-inspired visual cues, like a ball pit of dog toys and a vibrant red fire hydrant.

At Happy Place, Paul is confident the appeal won't fade if the installations don't overstay their welcome.

And if the interactive spaces aren't enough, he's also set up a "sweet tooth shack" that serves a photo-ready rainbow grilled-cheese sandwich ($10) and hot chocolate piled with whipped cream, marshmallows, rainbow sprinkles and a meringue stick ($5).

He hopes to take Happy Place to other big Canadian cities and believes interest will only grow as word spreads among friends.

"I don't personally believe that suddenly everyone is going to stop stocking their timeline or Facebook pages with photos," he said.

"If anything, they'll do it more."

Instagram influencer Negin Tavana, whose page @Negzila has more than 35,000 followers, is pictured in the confetti dome at the pop art installation "Happy Place" in Toronto, on Monday, October 29, 2018. THE CANADIAN PRESS/Chris Young