Is this stool taken? Toronto gets a new poop-themed cafe 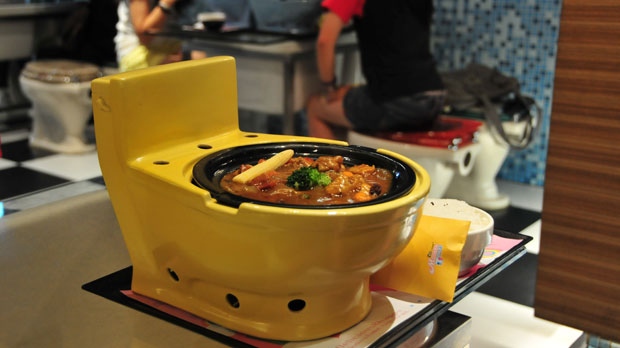 A dish served in a toilet at the potty-themed Modern Toilet Restaurant chain in Asia.

Is this stool taken?

This question may have a different, more uncomfortable meaning at a new café opening in Toronto’s Koreatown. Following a trend taking over parts of Asia, toilet-themed restaurants have finally found their way to Canada.

Lien Nguyen, the owner of Poop Café Dessert Bar on Bloor Street near Christie Street, said the opening of the derriere-delicatessen is expected to be this August.

The potty-themed café, like its counterparts in Asia and elsewhere, will serve desserts themed around the dirty deed, such as chocolate ice cream, pudding, and other brown treats. Nguyen said in an email that customers will sit on fake toilets, and eat out of toilet- and urinal-shaped dishes.

Modern Toilet Restaurant, based in Taiwan with locations across Asia, is perhaps the most well-known chain paying homage to the water closet. It features shower heads mounted on the walls, tiled floors, and poop-shaped cushions on the toilet-chairs where customers sit. The lights hanging from the ceiling are shaped like plungers, and some locations even have centerpieces made from bedpans.

Nguyen said the Toronto equivalent looks to be similar to those in Asia, but it’s still under renovations. She said it will be different by only serving doo-doo desserts rather than all types of food.

“Our concept is kind of similar to that but we only serve dessert. We will be serving Thai, Japanese, and Korean desserts and we will name them in a bathroom theme,” Nguyen said. “We will post online and ask people to vote for the names."

Local resident Meg Siegel was excited to see the sign for the new restroom-restaurant. “I’m going to Japan in October and had planned on going to one then,” she said. “Now I can just go to one here.”

“Toronto is adopting lots of the quirkier things from Asia. Anything that comes from Japan seems to be very trendy, like Uncle Tetsu’s,” she said. Uncle Tetsu’s is a cheesecake restaurant on Bay Street that usually has a long line out the door.

“I think people are all about places that make for a good photo op, like Sweet Jesus,” Siegal added. “I assume and hope this one will be similar.”

Nguyen is not concerned about resistance from the community over the presence of the potty-palace.

Decor inside the yet-to-be opened Poop Cafe Dessert Bar in Toronto's Koreatown is seen in this photo tweeted by the restaurant. (@poop_cafe/Twitter)