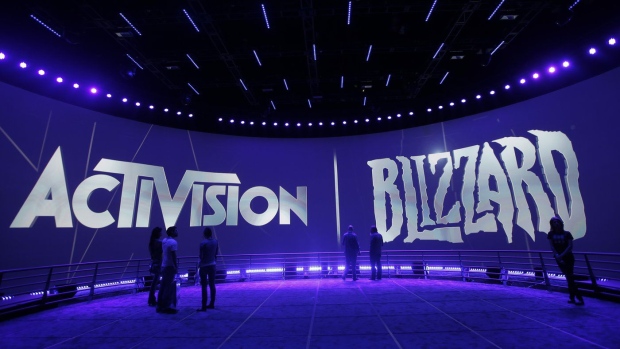 FILE - The Activision Blizzard Booth is shown on June 13, 2013, during the Electronic Entertainment Expo in Los Angeles. Microsoft’s plan to buy video game giant Activision Blizzard for $68.7 billion could have major effects on the gaming industry, transforming the Xbox maker into something like a Netflix for video games by giving it control of many more popular titles. But to get to the next level, Microsoft must first survive a barrage of government inquiries from various countries. An upcoming decision from the United Kingdom to close or escalate its antitrust probe is expected Thursday, Sept. 1, 2022. (AP Photo/Jae C. Hong, File)

Britain's Competition and Markets Authority said Thursday that it was referring the blockbuster deal for more scrutiny under a so-called phase 2 investigation.

The watchdog said that based on the available information, the deal “may be expected to result in a substantial lessening of competition” in the United Kingdom.

The all-cash deal, which is set to be the largest in the history of the tech industry, is facing scrutiny from competition regulators around the world. It would give Microsoft, maker of the Xbox console and gaming system, control of popular game franchises such as Call of Duty, World of Warcraft and Candy Crush.

In the U.K., regulators had opened a preliminary inquiry and threatened to escalate it earlier this month unless the companies came up with proposals within five days to ease their concerns.

Last week, “Microsoft informed the CMA that it would not offer such undertakings,” the watchdog said.

Microsoft declined to comment and referred to a statement this month from President Brad Smith, who said the company is ready to work with U.K. regulators and is committed to making Activision's popular Call of Duty game available on both Xbox and rival Sony's PlayStation.

More than eight months after Microsoft announced the deal, only Saudi Arabia has approved it. Competition watchdogs from New Zealand to Brazil and the U.S. are still examining the purchase, while the European Union is expected to soon announce its own investigation.