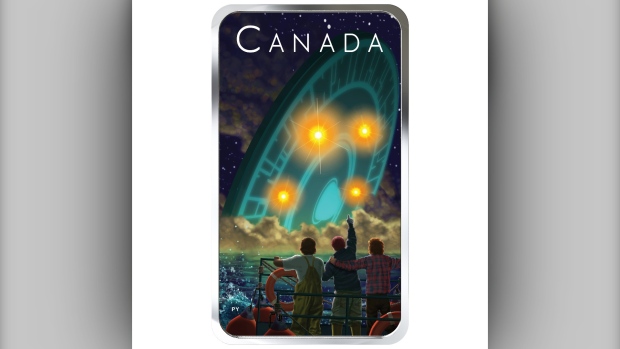 The Royal Canadian Mint has issued an innovative glow-in-the-dark coin that captures the eerie scene more than 50 years ago when an officially documented UFO crashed into the waters off Shag Harbour in southwestern Nova Scotia. THE CANADIAN PRESS/HO-Royal Canadian Mint

HALIFAX - The Royal Canadian Mint has issued a glow-in-the-dark coin that captures the eerie scene more than 50 years ago when what has been officially documented as a UFO crashed into the waters off Shag Harbour in southwestern Nova Scotia.

The pure silver, rectangular-shaped coins went on sale Tuesday for $129.95 each.

By midday, more than 80 per cent had been sold.

The colourful image on the coin shows three fishermen aboard a boat, staring and gesturing as the ghostly image of a flying saucer appears to crash into a choppy sea.

Shine the included black-light flashlight on the coin and the spaceship disappears, but four orange lights remain in the sky, as described by the many witnesses who reported seeing a UFO that night in 1967.

Mint spokesman Alex Reeves says 4,000 of the coins will be produced, with some of them sent to dealers for retail sales.

This report by the Canadian Press was first published Oct. 1, 2019.