More than 500 new species, including colourful beetles and a 'hell heron,' discovered in 2021 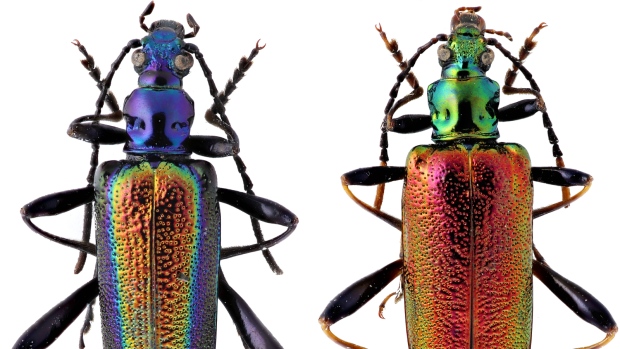 This image depicts beautiful metallic beetles, with the male (left) and female (right) side by side, discovered in India. (Telnov, 2021 via CNN)

(CNN) -- Shrimplike creatures, an extinct dinosaur called the "hell heron" and colorful beetles are among the 552 new species described this year by scientists at the Natural History Museum in London.

The researchers were largely restricted from traveling to international field sites or visiting other museum collections due to the pandemic, but they persevered to reveal a wealth of species new to science, both living and extinct. The museum, which holds 80 million specimens in its collections, has a staff of 300 scientists.

Dinosaur discoveries included giant carnivorous predators called spinosaurs, armed with crocodile-like skulls that helped them hunt down prey in the water as well as on land on the Isle of Wight 125 million years ago.

The first of the two spinosaurids was named Ceratosuchops inferodios, which means "horned crocodile-faced hell heron." In life, the dinosaur sported horns and bumps across its brow region. The spinosaurid also likely hunted in a way similar to herons, which can catch prey in the water as well as on land.

The second spinosaurid is Riparovenator milnerae, or "Milner's riverbank hunter." Both predators likely reached about 29.5 feet (9 meters) in length and had skulls measuring 3.2 feet (1 meter) long. Spinosaurid fossils have been uncovered around the world, but they may have evolved in Europe before migrating to other areas.

A decades-old fossil from the Isle of Wight, often called the United Kingdom's dinosaur capital, also led to the discovery of Brighstoneus simmondsi, an iguanodontian with an unusual snout.

Fossils finds elsewhere revealed the earliest ankylosaur from Africa, a Chinese sauropod and the oldest carnivorous dinosaur to be found in the UK.

"It's been a fantastic year for the description of new dinosaurs, especially from the UK," said Susannah Maidment, a senior researcher in paleobiology at the Natural History Museum, in a release.

"These specimens are parts of a vast palaeobiological jigsaw puzzle that allows us to understand environments of the past and how they changed over time."

Other ancient creature discoveries in 2021 included spiders trapped in amber, a plant-eating crocodile relative and a "Jurassic mouse" that once ran between the feet of dinosaurs 166 million years ago in what is now Scotland.

All creatures great and small

Earth is home to a vast array of small shrimplike crustaceans called copepods. They are found across the globe, from mountain lakes to ocean trenches, and scientists discovered 291 new species of copepods in 2021.

While these creatures are tiny, they are a vital source of food for fish and krill and critical to Earth's carbon cycle and ecology. A collection spanning six decades, created by French marine zoologist Françoise Monniot and her late husband, marine biologist Claude Monniot, provided the basis for the perfect pandemic project.

"Copepods are not only free-living but many are parasites, and they can be found living in virtually every other major animal group," said Geoff Boxshall, merit researcher in the museum's department of life sciences, in a statement. "Completing the series of papers became my lockdown project when I was unable to enter the Museum."

In addition to wasps, moths, crabs and flies, researchers also found 90 new species of beetles, including shiny purple and green ones from India and a large-jawed species from the Philippines.

And scientists finally solved the mystery of a bush cricket from Southeast Asia. They first heard its unusual, beautiful song in 1990, but didn't connect the two until now.

There are five new species of plants from eastern Africa, called jewelweeds or touch-me-nots. These plants typically have pink or white blossoms, but some have begun to produce red flowers to make themselves more visible to birds.

Unfortunately, some of the species discovered are also likely extinct, highlighting the importance of recognizing and understanding every creature on our planet.