Peanut allergy treatment safe for allergists to use with young kids, study finds 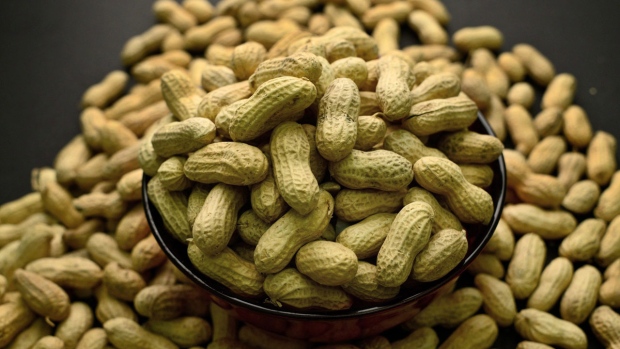 An arrangement of peanuts in New York is shown in a Feb.20, 2015 photo. A new study suggests preschoolers who are allergic to peanuts can be treated safely by eating small amounts of peanut protein with guidance from a specialist. THE CANADIAN PRESS/AP/Patrick Sison

VANCOUVER -- A new study suggests preschoolers who are allergic to peanuts can be treated safely by eating small amounts of peanut protein with guidance from a medical specialist.

The findings offer assurances to allergists in clinics and hospitals that oral immunotherapy does not have to be confined to research settings.

Their study found just one of 270 children who received oral immunotherapy had a "severe" reaction. Meanwhile, 11 children, or four per cent, received symptom-relieving epinephrine.

The children were aged nine months to five years and were treated from April 2017 to November 2018.

The Canada-wide findings were published in the "Journal of Allergy and Clinical Immunology: In Practice."

Oral immunotherapy is a relatively new treatment in which a patient is directed to eat small amounts of an allergenic food to build up tolerance. The dose is gradually increased to a determined maximum, known as a maintenance level, that is continued for at least one year, even two.

At that point, a child might be ready for a food challenge to determine whether they have become desensitized to their allergen, for example by eating one serving of peanut.

"I was observing several of my patients flying to the United States and going to far-away clinics to get this treatment and I felt it was very confusing... They were told by one allergist that, 'Oh yeah, it's totally available and it's time to do it,' and then other allergists (said) that it wasn't. And some (families) were left to their own devices."

Chan is among those who offer oral immunotherapy, believing that peanut allergies are very treatable, especially among young children.

"There's speculation that with preschoolers their peanut allergy is less severe and it's also more malleable to treatment," says Chan, who cites evidence that older kids appear more likely to have a severe reaction during OIT and are more likely to quit treatment.

"If you don't do it when a child is in preschool you're making it a lot harder as they get older, not just from a likelihood of severe reaction point of view, but also the older kids have more fear and anxiety and aversion. Even when parents want the older children to do something like oral immunotherapy... quite often the children say, 'No."'

Chan considers the study "a game-changer" in encouraging other allergists to consider OIT, and hopes it will move the conversation to establishing national guidelines that can ensure safe practice.

"Because the ship has sailed... and there are a certain number of allergists offering it outside of research already, maybe we should try to make sure it's safe for patients getting it in those offices by having more uniform criteria and guidelines."

The children in the study were seen by a pediatric allergist approximately every two weeks, where they were fed a peanut dose that gradually increased at every visit.

Parents also gave children the same daily dose at home between clinic visits, until they reached a maintenance dose of 300 milligrams of peanut protein -- approximately equal to one peanut.

Ninety per cent, or 243 children, reached the maintenance stage. Meanwhile 27 children, or 10 per cent, dropped out for reasons including repeated allergic reactions, parental anxiety and the child refusing to take the daily dose.

Dropouts included the one child who had a severe reaction -- a 22-month-old who experienced abdominal pain, vomiting, and hypotension after the first dose. The toddler received one dose of epinephrine and quickly recovered, but left the program.

Nevertheless, Chan says adverse reactions were rare, considering that more than 40,000 doses of peanut were administered, and only 12 doses resulted in reactions requiring epinephrine.