Private Canadian astronaut gears up for 'pain' experiments in space 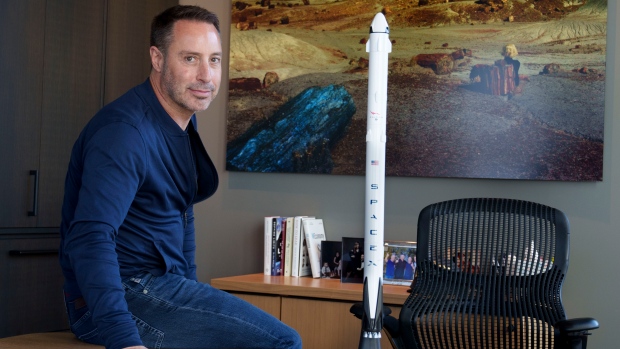 Mark Pathy is seen in his office with a model of the SpaceX starship in Montreal on Monday, November 8, 2021. Pathy is slated to embark in February on a 10-day journey on the maiden voyage of Texas-based Axiom Space — paying about 50 million dollars US for the privilege. THE CANADIAN PRESS/Paul Chiasson

MONTREAL - Mark Pathy has boarded more than his share of vehicles.

He rode to the Laconia motorcycle rally in New Hampshire years ago, and also headed with his brother to Chicago to learn how to race Kawasaki Ninjas.

In 1997, he drove a recreational vehicle across the former Yugoslavia, camping in communities with few supplies or tourist trappings following a catastrophic three-year war there.

Now, the 52-year-old Montreal businessman is gearing up to be a guinea pig for experiments on pain as part of the first privately crewed mission to the International Space Station (ISS).

Slated for February, the trip will see Pathy and three others embark on a 10-day journey aboard the Crew Dragon spacecraft - manufactured by Elon Musk's SpaceX - on the maiden voyage of Texas-based Axiom Space. And he's paying more than US$50 million for the privilege.

“It's been a dream since I was a little kid and watched Captain Kirk bouncing around the universe in the Enterprise,” said Pathy, who heads the boutique investment firm Mavrik Corp.

Fellow Montreal native William Shatner - who portrayed Kirk on “Star Trek” - was one of four passengers to blast off on a ship built by Jeff Bezos' Blue Origin for a 10-minute jaunt into space last month. The actor's sojourn played into a growing demand for suborbital tourism that companies such as Richard Branson's Virgin Galactic are also tapping into. But those up-and-down excursions are too brief for Pathy's taste.

Pathy, a former co-CEO of Montreal-based shipping company Fednav - co-founded by his grandfather - says his upcoming journey marks a major step forward for commercial spaceflight, even if yet another Quebecer, Cirque du Soleil co-founder Guy Laliberte, beat him to the launchpad when he become the first private citizen from Canada to reach orbit in 2009.

Dubbed Ax-1, February's mission will see Pathy participate in a dozen research projects on board; many involve registering levels of pain associated with bodily changes during weightlessness.

“I thought initially that I was going to be required to put my hand on the table and smash it with a hammer and see how it felt. Fortunately it's not that extreme,” he said in an interview with The Canadian Press at Mavrik's office in downtown Montreal.

The experiments will measure everything from pain linked to bone-tissue breakdown to astronauts' immune cells in relation to “the role of systemic inflammation in acute and chronic pain.”

Pathy will undergo a battery of baseline medical tests before launch and after splashdown, including magnetic resonance imaging and other scans, as well as completing questionnaires and blood and urine samples at the space station.

He'll also don a stretchy “smart” jersey and headband - dubbed the Astroskin biomonitor system by its maker, Montreal-based Carre Technologies - that records health data in real time and relays it back to Earth. Canadian astronaut David Saint-Jacques first tested the Astroskin on the space station in 2019.

“I didn't have time to get a PhD before launch, so for the most part I have to play the role of lab rat,” Pathy said, sitting in his corner office across from a two-foot model of the spacecraft and Falcon 9 rocket.

His crewmates will be Ohio real estate and tech entrepreneur Larry Connor and Israeli businessman Eytan Stibbe, under the command of former NASA astronaut Michael Lopez-Alegria.

The foursome is not bound to any particular diet or physical regimen. But they are partway through a training syllabus that involves preparing for emergencies - like a fire or depressurization - and learning how to live aboard the spacecraft and the space station, where about eight of their 10 days in space will be spent.

The private astronauts have been navigating mock-ups of the ISS modules and the space capsule at NASA's Johnson Space Center in Houston and in Hawthorne, Calif.

Earlier this year, the group headed to Pennsylvania to simulate a zero-gravity environment via 40-second airplane freefalls, and to use a centrifuge facility that mimics the acceleration of a rocket launch.

The commercial cosmonauts also trekked for a week through Alaska's Talkeetna Mountains to test their ability to endure stressful environments as a group earlier this year.

“It rained every single day on that on that trip. So we had to contend with being wet all the time and trying to still, in wind and rain, set up our shelter and cook meals and take care of each other and ourselves,” recalled Pathy.

Lopez-Alegria, who will be making his fifth trip into space, said Pathy was a “very steady” presence.

“As the youngster on the crew in his early 50s, he was sort of the physical rock. He was having to slow down and make sure that the rest of us were keeping up,” the former test pilot said.

To keep him upbeat, Pathy is requesting a playlist or two from Stingray Group Inc., the Montreal-based music and media company he chairs. “Like Elton John's 'Rocket Man,' or Ziggy Stardust,” he joked.

Pathy has deemed the risks associated with the mission “acceptable.”

“I have a young family; I'm adventurous but I don't have a death wish,” said the father of three. “My wife at first thought I was kind of half joking ... When I said I think I might be going to space, she said: 'Not without me, you're not.”'

The price tag wasn't lost on him, either.

“It is a lot of money. I feel very fortunate to be able to afford this kind of trip. Obviously not many people can. But at the same time I don't have to, fortunately, choose between doing something like this or being active philanthropically.”

He hopes the so-called overview effect, which is said to give people who've viewed Earth from space a fresh awareness of its fragility, will hit him as well.

“By all accounts it's a deep, profound and in some cases life-changing experience that only gives one new perspectives on life and the planet and our role on it. And hopefully that will help guide me through the rest of my life and what I can do philanthropically,” he said.

Over the past decade, NASA has relied increasingly on the private sector to deliver supplies, experiments and now astronauts to the moon and the International Space Station. Entirely private missions offer a chance to relieve pressure from budget-stretched government agencies and shine the spotlight on Canadian technology - like the Astroskin - Pathy said.

“The research that I'm taking with me, which is mostly Canadian, a lot of it would probably have had to wait a very long time to get the opportunity to get tested in space,” he said, noting the projects are in collaboration with a half-dozen Canadian universities.

“I think it's positive that people like me can expedite those projects, and that they don't then get put on the shoulders of Canadian taxpayers.

“My fascination with space is that it has no limits,” Pathy said. “We can always go further, we can always learn more. And that's pretty incredible.”