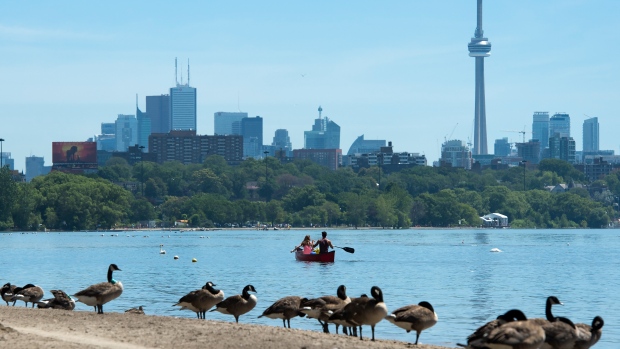 Canadian Geese watch on the beach as people paddle in a canoe on Lake Ontario in Toronto on Monday, July 15, 2019. (THE CANADIAN PRESS/Nathan Denette)

ANN ARBOR, Mich. - Cleaning up some of the Great Lakes region's most heavily polluted areas has led to billions of dollars of economic development, according to a report released Tuesday

The study, conducted by the International Association for Great Lakes Research in Ann Arbor, Mich., reviewed efforts to restore harbours, river mouths and other spots that were contaminated with toxic wastes during the industrial boom era.

Canada and the U.S. identified 43 such “areas of concern” in the 1980s, and work remains to be done on most of them.

The report highlights 10 places where cleanups have spurred development, including four in Ontario.

“The successes illustrated in the 10 case studies not only make a case for continued support to finish cleaning up the Areas of Concern, they also demonstrate approaches that other waterfront communities can consider in shaping their own collaborative efforts,” a news release from the association reads.

“They also remind us of our place in the Great Lakes basin ecosystem, and how our well-being and health are inextricably linked to the health of its waters.”

Each section of the report was written by those involved in the clean-up process, listing economic gains - both realized and potential. The Canadian sites were areas in Toronto, Hamilton, Collingwood and Severn Sound, near Midland, Ont..