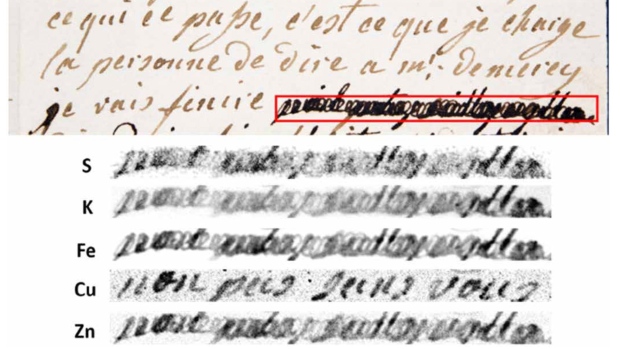 This image provided by researchers shows a section of a letter dated Jan. 4, 1792 by Marie-Antoinette, queen of France and wife of Louis XVI, to Swedish count Axel von Fersen, with a phrase (outlined in red) redacted by an unknown censor. The bottom half shows results from an X-ray fluorescence spectroscopy scan on the redacted words. The copper (Cu) section reveals the French words, “non pas sans vous" (“not without you"). (Anne Michelin, Fabien Pottier, Christine Andraud via AP)

Marie Antoinette sent these expressions of affection - or more? - in letters to her close friend and rumored lover Axel von Fersen. Someone later used dark ink to scribble over the words, apparently to dampen the effusive, perhaps amorous, language.

Scientists in France devised a new method to uncover the original writing, separating out the chemical composition of different inks used on historical documents. They tested their method by analyzing the private letters between the French queen and the Swedish count, which are housed in the French national archives.

That allowed them to read the original words and even identify the person who scratched them out - Fersen himself.

“It's always exciting when you discover that you can know more about the past than you thought you could,” said historian Rebecca L. Spang, who studies the French Revolution at Indiana University, and was not involved in the study.

The letters were exchanged between June 1791 and August 1792 - a period when the French royal family was kept under close surveillance in Paris, after having attempted to flee the country. Soon the French monarchy would be abolished, and the next year both Marie Antoinette and her husband, Louis XVI, would be beheaded.

“In this time, people used a lot of flowery language - but here, it's really strong, really intimate language. We know with this text, there is love relationship,” said Anne Michelin, a material analyst at the Sorbonne's Research Center for Conservation and co-author of the research published Friday in the journal Science Advances.

The wide-ranging letters, penned on thick cotton paper, discuss political events and personal feelings. The redacted phrases, such as “madly” and “beloved,” don't change the overall meaning, but tone of the relationship between the sender and receiver.

Marie Antoinette and Fersen met in France when they were both 18. They kept in touch until her death.

“In 18th century western Europe, there's a kind of cult of the letter as a form of writing that gives you access to a person's character like no other,” said Deidre Lynch, a historian who studies the period's literary culture at Harvard and was not involved in the study.

“Like a metaphorical state of undress, they've let their hair down and show are who they really are,” she said.

But savvy writers were also aware that their letters may be read by multiple audiences. Some correspondents in 18th century Europe famously employed secret codes and so-called “invisible ink” to hide their full meaning from certain eyes.

The letters exchanged between Marie Antoinette and Fersen, who never married, were altered after the fact. Certain portions of text were scribbled out in dark ink. His family kept the correspondence until 1982, when the letters were purchased by the French national archives.

In eight of the 15 letters the researchers analyzed, there were sufficient differences in the chemical composition of the inks - the proportion of iron, copper and other elements - that they could map out each layer separately, and thus recover the original text.

“This is amazing,” said Ronald Schechter, a historian who studies Marie Antoinette's library at William & Mary and was not involved in the study. He said that the technique could also help historians decipher redacted or censored “phrases and passages in diplomatic correspondence, sensitive political correspondence, and other texts that have eluded historical analysis due to redactions.”

Michelin said the most surprising finding was that her team could also identify the person who censored the letters. It was Fersen, who used the same inks to write and redact some of the letters.

His motivations, however, remain a matter of speculation.

“I bet he was trying to protect her virtue,” said Harvard's Lynch. “To throw out her letters would be like throwing out a lock of her hair. He wants two incompatible things: He wants to keep the letters, but he also wants to change them.”