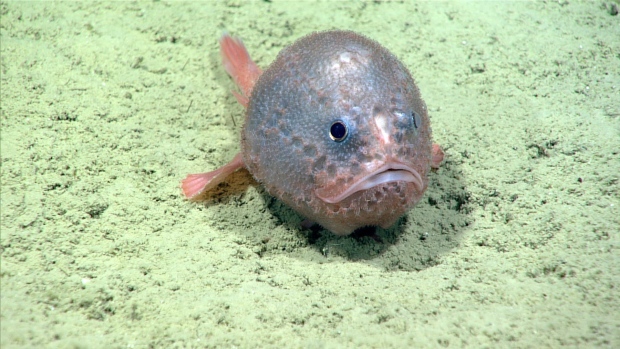 A football fish photographed in the Verrill canyon by a National Oceanic and Atmospheric Administration research ships remotedly operated vessel, off Nova Scotia is seen in an undated photo provided August 31, 2019. Scientists at Canada's major fisheries research centre are watching an underwater livestream with excitement this weekend as two remotely operated vehicles scan the waters off Nova Scotia for rare or unknown species. THE CANADIAN PRESS/HO, DFO

HALIFAX - Research scientists are watching with fascination this weekend as a search for rare undersea life is being broadcast live by two remotely operated vessels run by the National Oceanic and Atmospheric Administration off the coast of Nova Scotia.

Already, the footage has provided never before seen images of the eastern slope of the Gully, Canada's first marine protected area, revealing sea sponges that will require DNA testing to identify and vast fields of deepwater coral.

Ellen Kenchington, a federal marine biologist with the Bedford Institute of Oceanography, says the huge television screen at her command centre in Halifax creates a rare opportunity to observe what's living on the ocean bottom.

“It's so cool,” she said. “People who study forests can walk in a forest. We don't get to do that usually.”

On Saturday, the NOAA research vessel Okeanos Explorer was filming in waters of about 350 metres, and at one point viewers were treated to spectacular and frightening tight shots of a huge lobster devouring a squid one tentacle at a time.

On Thursday, the cameras revealed the existence of large fields of bamboo coral at depths of over a kilometre - a sight that Kenchington said demonstrates there are still many things scientists don't know about the life in the Gully, about 200 kilometres off Nova Scotia's east coast.

The steep sides of the underwater preserve plunge down more than 2.5 kilometres, creating habitat for a vast range of life - including the endangered bottlenose whales that hunt for squid more than a kilometre beneath the surface.

Previous research has been on the western wall and the seafloor of the Gully, but the eastern area hasn't received the same attention.

That was the focus of the visit of the visit by the NOAA vessel, which is operating as part of an international agreement between Canada, the United States and and the European Union to increase knowledge of the North Atlantic Ocean.

The researchers say they're trying to understand the Gully's deep canyons in part to find ways to ensure the recovery of the endangered bottlenose whales.

Kenchington said it's believed that the whales rely on a species of squid for food, but it's less clear where the squid are located and what their abundance is.

“Everything we learn builds on our previous knowledge and eventually we'll understand just what those whales are feeding on,” she said.

The Gully area - about 2,360 square kilometres - was also originally protected in 2004 because of the diversity of deepwater coral.

So far, 34 species of cold-water coral have been identified, but all were on the western wall of the Gully.

“In our dives on the eastern wall we saw some interesting coral we hadn't seen before with our cameras. We're not yet sure if they're new species or different shapes of species we've seen elsewhere,” said Kenchington.

“We should hear back in a few months of just what was collected.”

The researchers say gaining a better picture of the status of the seafloor communities is important because it will allow them to monitor changes caused by temperature changes in the ocean related to climate change - such as potential shifts in the Gulf Stream current.

“If there are major changes in the currents that feed the Gully we might then find some of the species decline while others increase in abundance,” said Kenchington.

The sponge species being spotted may also have potential to provide information on potential medicines, the scientist said.

“Learning more about them may be good for all humankind,” she said.

The survey continues on Sunday in an area known as the Fundian Channel-Brown Bank, south of Yarmouth, at depths of over 1,600 metres.

The expedition's data will be reviewed to update the location of the coral and sponges that were spotted during the survey during the trip along the coast.

This will be combined with the data from the previous surveys of the other wall of the Gully.

“We can update our atlas of the coral species for the Maritimes species for all of the region, which hasn't been done for over a decade ... so people can get an overview of what's living in our waters,” said Kenchington.

- The livestream of the survey can be viewed at https://oceanexplorer.noaa.gov/livestreams/welcome.html