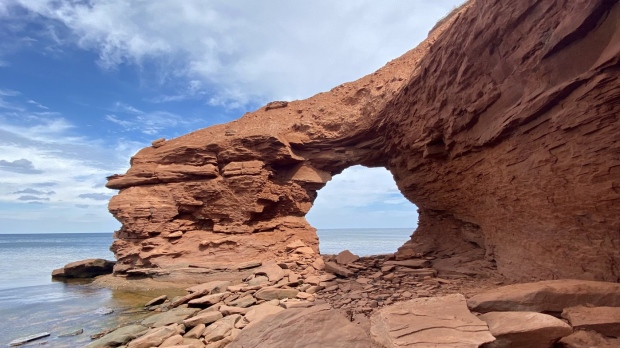 The sea arch in MacKenzie's Brook near Cavendish, P.E.I., is shown in this August 31, 2022 handout photo. THE CANADIAN PRESS/HO - Rachelle Henderson

A storm has toppled a sandstone arch in Prince Edward Island that had been weakened during Fiona, the second celebrated landmark lost in the province in the last two months.

The often-photographed arch at MacKenzies Brook in the P.E.I. National Park near Cavendish fell Sunday while the island dealt with rain and wind from the remnants of hurricane Nicole.

Michelle Boyce, the captain of Atlantic Sailing P.E.I. in North Rustico, has been taking people by boat to see the coastal arch up close for more than a decade. She said in an interview Monday she was devastated to learn it had collapsed.

“We keep telling people the arch won’t be there forever due to erosion,” Boyce said, but she never thought its demise "would come so soon."

Parks Canada warned people in early November to stay clear of the arch because it was at risk of collapsing due to damage from post-tropical storm Fiona, which hit the Island on Sept. 24. Parks Canada did not immediately reply to a request for comment Monday.

While the arch caved in, one sandstone stack remains in the water that Boyce hopes will be a new landmark for people to enjoy. She said perhaps it will become the MacKenzies Brook teacup, a reference to another lost landmark about 30 kilometres to the west.

When Fiona hit, surging seas toppled a sea-stack rock formation known as the Teacup Rock at P.E.I.'s Thunder Cove Beach. The storm also took out sand dunes and washed out some roads within P.E.I. National Park.

“The harbour as a whole has dramatically changed," Boyce said. "Docks are in the water, buildings are gone and damaged. It’s been a really rough spell.”

Islanders mourning the loss of the arch took to social media, sharing photos of the arch still intact and sharing memories of visits to see it.

Boyce said the coastal damage and lost landmarks highlight the impact of erosion, which is sped up by climate change, something she discusses on her sailing tours. “Educating people about the damage climate change is causing is a huge part of what we do,” she said.

As the coastline erodes, the harbour where Boyce sails is becoming shallower, which affects both sea life and boats. “We run a sailboat, so we need deeper water, and we’re now touching bottom all the time,” Boyce said.

This report by The Canadian Press was first published Nov. 14, 2022.