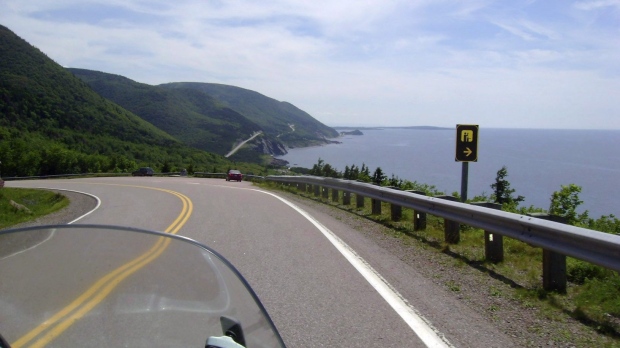 This July 13, 2010 photo shows the road along the Cabot Trail in Cape Breton, Nova Scotia. If you're looking to explore Canada this summer, you'll first have to navigate the fluctuating patchwork of travel restrictions aimed at preventing the spread of the novel coronavirus throughout the country. THE CANADIAN PRESS/AP-Glenn Adams

TORONTO - Out of work and far from family, Cora Matheson hit a low point sheltering in place in Toronto. She began debating a summer getaway to her hometown of Kenora, Ont., as she's done many summers before.

She knew the scenic region had been discouraging visitors throughout the pandemic, especially from urban centres where COVID-19 counts were still high.

But the 30-year-old was “homesick and sad and anxious.”

She booked a flight and made arrangements to quarantine on arrival, joining a growing number of Canadians attempting summer travel amid a patchwork of government rules and industry announcements that often appear at odds with public health directives.

“I really struggled with the decision for a good few weeks,” says Matheson, who voluntarily completed two weeks of isolation and has formed a bubble with her parents.

“Kenora is a beautiful place in the summer. My parents live on a lake and I live in a shared house in Toronto, which is great, but the idea of being around nature and eventually around some family was just a very therapeutic thought for me.”

Figuring out where and how to travel safely amid a pandemic has upended the notion of a carefree holiday, but it's clear many Canadians are eager to try.

Warmer weather and dropping infection rates have led many parts of the country to reopen economies and ease restrictions on summertime rituals that include camping, sports activities, and short-term rentals.

Meanwhile, the travel industry is inviting wanderlust as it ramps up service, with Air Canada improving its cancellation policy in time for a limited summer schedule and VIA Rail recently adding more trains to routes including Toronto-Montreal.

But elsewhere, the message appears quite different.

By and large, the ongoing advice is to avoid hitting the road: “Now is not the time to travel,” says Ontario's tourism website, which encourages virtual experiences instead.

And while most provincial borders remain open, unnecessary travel to New Brunswick, Prince Edward Island and Newfoundland and Labrador is banned.

Non-essential travel to the three territories has also been largely prohibited, although Yukon has said restrictions will lift with B.C. in July and the Northwest Territories government has indicated some changes to their rules are coming.

Nova Scotia and friendly Manitoba require all visitors to self-isolate for 14 days, and anyone just driving through must self-isolate while in those provinces.

“This means you cannot stop at a grocery store,” warns the Nova Scotia website.

“It is best that you check with other provinces before entering to learn about any restrictions they have in place that may impact your travel.”

Ryerson University professor Frederic Dimanche notes provincial guidelines have been changing daily, so he urges anyone thinking about travel to make sure they are up-to-date on the rules and what services may be available.

He also says travellers will have to adjust expectations of how their usual holiday activities unfold - new restrictions might keep shopaholics from visiting their favourite store, while foodies may have to get used to takeout.

“I think everybody will find that this summer is going to be a different way of travelling,” says Dimanche, director of the Ted Rogers School of Hospitality and Tourism Management.

The line out of Ottawa is that Canadians should “visit local.”

The government has earmarked millions of dollars to promote holiday travel inside Canada, re-dedicating funds originally meant to attract foreign visitors. Another $40 million has been set aside to help tourism agencies adapt their operations to the pandemic. But tourism industry groups are also demanding more clarity from government on inter-provincial travel guidelines.

A more specific travel tip might be “stay provincial.”

British Columbia makes that clear to anyone eager to visit its majestic peaks, forests and falls with a request to “camp close to home.”

“Non-BC residents with existing reservations should call the call centre to cancel for a full refund by June 15,” says the BC Parks site.

And over in Nova Scotia, Premier Stephen McNeil expressed hesitation in pursuing an Atlantic bubble that's long been floated by the easternmost provinces.

The idea would allow residents in all four provinces to travel without the need to self-isolate, something P.E.I. Premier Dennis King suggested could happen as soon as early July but McNeil refused to put a date on the plan Thursday.

Those urging caution point to the ongoing threat of a second wave of COVID-19 infection.

In Ontario, Dr. Ian Gemmill, acting medical officer of health for the province's Northwestern Health Unit, says anyone thinking about leaving their region must remain vigilant on hand-washing and physical distancing.

That advice will surely be tested in Ontario this weekend, when much of the province enters the second stage of a reopening plan that could tempt residents in restricted areas to take a day trip or more.

Among the amenities allowed to newly court visitors are provincial park beaches and campsites, and a variety of tour and guide services, including those for wineries and breweries, as well as bus, bike and boat tours.

Gemmill anticipates visitors may venture to his lake-dotted region from southern Ontario or Manitoba and so he reminds travellers to self-monitor for symptoms, especially if they are coming from a hotspot. Ontario does not require out-of-province visitors to self-quarantine.

He notes several new cases emerged in Kenora this week, sparking warnings to customers of a Walmart and No Frills grocery store to watch for symptoms. But Gemmill said Thursday they were not believed to be travel-related.

A possible COVID-19 spike worries Matheson, who arrived in Kenora on May 23 - first by plane to Winnipeg in an aircraft she says appeared less than half-full, and then to Kenora by car, which her dad and brother brought to the airport.

As an extra precaution, she took a COVID-19 test a few days after arriving, which came back negative. There have been compromises to this vacation, Matheson allows, but she says it's worth it to be close to those she loves.

“It was just this longing to want to be home right now and I think that just makes sense for so many people.”

- with files from Adina Bresge

This report by The Canadian Press was first published June 12, 2020