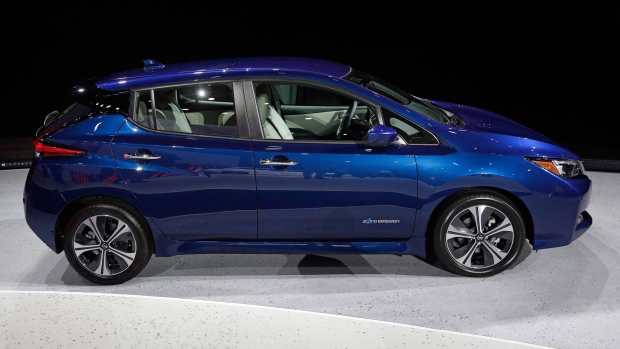 In this Tuesday, Sept. 5, 2017, file photo, the 2018 Nissan Leaf is on display during an unveiling event in Las Vegas. THE CANADIAN PRESS/AP-John Locher

MONTREAL -- Electric car advocates are hoping to get a signal in next week's federal budget that the government is prepared to support sales across the country even as Ontario overtook Quebec for selling the most electric vehicles last year.

"If they put some money aside then we know for sure these things are going to happen," she said in an interview. "With no money it's a little bit more challenging."

Electric Mobility Canada has recommended that Ottawa eliminate the GST on electric vehicle sales, which it estimates will cost about $50 million a year.

"We are waiting impatiently for the budget and for a strategy that will be announced this year," Guimont added.

Delphine Denis, a spokeswoman for Transport Minister Marc Garneau, declined to indicate if any such measures will be unveiled in the budget.

With transportation accounting for about 24 per cent of Canada's emissions, she said the government's zero emission vehicle strategy to be unveiled this year will help accelerate commercialization and support efforts to bring new technologies to market.

According to data compiled by Fleet Carma, 7,477 battery and plug-in hybrid electric vehicles were sold in Canada's most populous province.

That compared with 7,194 sold in Quebec, followed by 3,270 in British Columbia. The other provinces lagged far behind.

Guimont said more generous Ontario rebates and the installation of more charging stations at work are helping the province to catch up.

"Quebec is pretty stable but in Ontario the financial incentives of $14,000 are making a big difference," she said in an interview.

Ontario's sales increased 120 per cent from 2016, when increased rebates were implemented. Quebec's sales were up 44 per cent.

Ontario has invested to support EV adoption by offering the country's largest incentives and supporting the creation of the most extensive public fast-charging network of 140 units, says Ontario Transportation Minister Kathryn McGarry.

"Given this, it's no surprise that we've taken the lead in EV sales," she said in an email.

Despite Ontario's growth being helped by tens of millions of dollars of subsidies, industry analysts predict the number of electric vehicles will remain well short of the government's target of five per cent of overall new passenger vehicle sales in 2020.

Industry analyst Dennis DesRosiers has said "the chances of meeting it aren't low, they're zero."

But with a doubling of sales each year, Clairman believes reaching such an ambitious goal of 14,000 new car sales in 2020 isn't "far-fetched."

"Whether we get it exactly or not matters less than being in the right direction."

Electric plug-in vehicle sales outpaced plug-in hybrids for the first time across the country. That was led by the Chevrolet Bolt and followed by Tesla models X and S. The Chevrolet Volt was again the most popular plug-in electric vehicle.

Overall vehicle sales grew 4.8 per cent to a record 2.08 million last year. By December, electric vehicles accounted for 1.4 per cent of all sales.

Quebec still had the highest percentage of electric vehicles sold, at 2.2 per cent of all vehicles for the year, followed by B.C. at 1.9 per cent and Ontario at 1.6 per cent.

Quebec implemented Canada's only law mandating a minimum threshold of electric vehicle sales starting in the 2018 model year as it pushed for 10 per cent of new vehicles sales be electric by 2025 and to have 100,000 on the road by 2020.