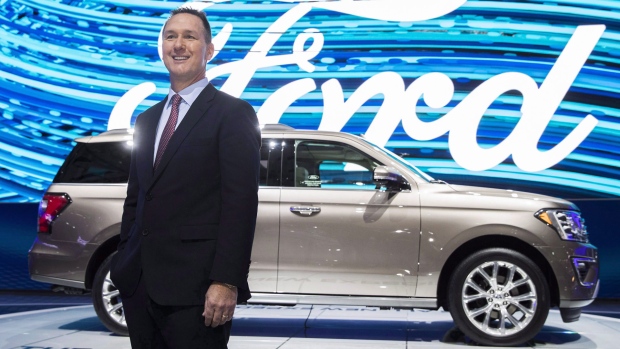 Ford Canada President Mark Buzzell poses in front of the 2017 Ford Expedition during the Canadian International Autoshow in Toronto on Thursday, February 16, 2017. THE CANADIAN PRESS/Mark Blinch

VANCOUVER - Ride-hailing, electric vehicles and self-driving cars are transforming the future of Ford Canada, and president and CEO Mark Buzzell says the company is gearing up for a radical shift toward becoming an “auto and mobility” business.

Buzzell says Ford has already invested in Chariot, an app-based service that allows users to hail rides on transit vans, as well as bike-sharing service GoBike in the United States.

The company has also invested $4.5-billion in electric vehicles to bring 13 new models to market over the next five years and is promising an autonomous vehicle by 2021.

Buzzell says the company will continue to have a strong manufacturing workforce and the transformation will likely mean more software engineering jobs, although he wouldn't speculate on hiring plans in Canada.

He says Canada is trying to position itself as a technology and innovation leader and the company is working closely with the federal government on projects including improving engine development at its facilities in Windsor, Ont.

Buzzell says it's too early to comment on the U.S. administration's proposal for a border-adjusted tax on imports, but he says Ford's chairman Bill Ford and CEO Mark Fields are communicating to President Donald Trump that the company supports open trade agreements.