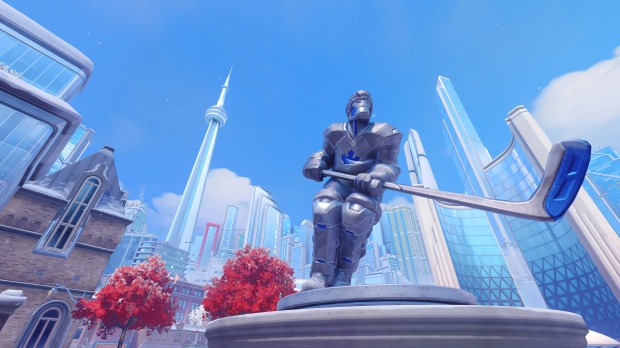 A screengrab from the video game "Overwatch 2," is shown in a handout. There will be a distinctly Canadian flavour to "Overwatch 2," the new instalment of the popular multiplayer video game due out next month. THE CANADIAN PRESS/HO-Activision Blizzard

TORONTO - Gamers are in for a distinctly Canadian experience when they saddle up for “Overwatch 2.”

The multiplayer first-person shooter from Activision Blizzard, slated for release Oct. 4, features a futuristic Toronto map called New Queen Street. Gamers will battle it out against a backdrop of the CN Tower, City Hall and its iconic ice rink and Toronto sign, and the distinctive train tracks leading to Union Station among other local landmarks.

Lucas Annunziata, a senior environment artist with Blizzard, designed the map. While originally from Vermont, Annunziata knows the city well from working in Toronto for Torn Banner Studios from 2013 to 2018.

He also consulted other Canadians in the Blizzard ranks about other possible Toronto icons to include.

Designing an Overwatch map is more than cherry-picking local landmarks. The game, which features a roster of heroes with a wide array of different abilities, offers plenty of nooks and crannies not to mention different routes to the objective.

High ground and cover are important in the game, allowing for attackers to rain havoc and defenders to escape damage. The Toronto map features a pair of streetcars that offer both local colour and cover.

“As an environment artist, yeah you want it to look beautiful but it really does have to just be a backdrop for the action within the game,” said Annunziata. “So we do a whole lot of work to layer those things in without them being distracting. Because at Blizzard one of core beliefs is game play first.”

Annunziata, who spent two semesters in Montreal as part of a study abroad program affiliated with Champlain College in Burlington, Vt., has been with Blizzard since February 2018. Initially stationed at Blizzard headquarters in Irvine, Calif., he and his wife have since relocated to Plattsburgh, N.Y., to be closer to family.

Organizers expected some 4,000 fans over the four days of the tournament.

For Annunziata, it was a rare chance to see Toronto's entry in the Overwatch League play on its hometown map.

“It is a very special experience to see the Toronto esports team playing on the Toronto map in Toronto, right on their home turf” said Annunziata. “The energy and excitement is just off the chain, especially after the past two years with so many developers working at home. To be here in person and see all of these people in the flesh, on the big screen, it's a very surreal experience for me.”

Blizzard showcased the Toronto map in unveiling the new game at its annual BlizzCon convention.

Toronto's ever-present raccoons also get their due in the map in the form of the Toronto Raccoons curling club. And there is a nod to Tim Hortons via a Tim Fordsons coffee shop.

Annunziata paid attention to detail, making sure the city trash cans were accurate, albeit “levelled up a little bit and a little sci-fi and futuristic.”

He also filled the map with an array of different restaurants to reflect Toronto's multicultural makeup.

“That was one thing that really stood out to me when I moved here,” he said. “How many different kinds of people live here and how everyone is just so excited to share and partake in the different food cultures. It's something that really brings people together.”

There is even a nod to the Maple Leafs' Legends Row with a statue of a futuristic hockey player with a blue Maple Leaf on his chest.

Annunziata, who has fond memories of his time here, says the initial reaction to the map has been positive, with many happy to see Toronto playing itself rather a U.S. city.

The new game adds to its existing cast of playable characters with Sojourn, the game's first Canadian hero developed by Toronto's Paul Warzecha, who is a character art outsourcing supervisor at Blizzard.

The primary game mode in “Overwatch 2” is called Push, which sees two teams of heroes compete over two robots that are each pushing a barrier deep into the other's territory. Whichever team's robot covers the most ground wins.

More modes and maps are expected after the game's release.