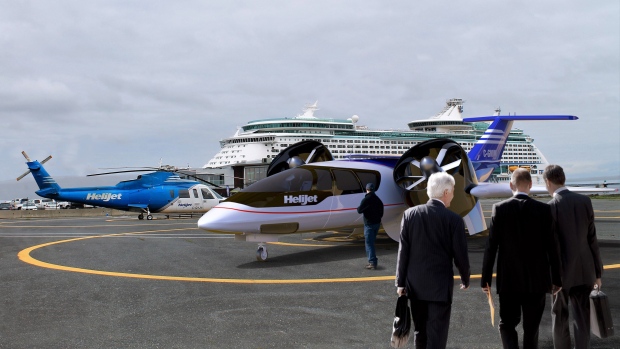 A proposed electric helicopter is seen in an undated artist's rendering handout image. Helijet, North America's largest helicopter airline, has announced it has partnered with Blade, a technology platform, in the project. THE CANADIAN PRESS/HO-Helijet

Helijet president Danny Sitnam says the company has partnered with Blade, a technology company, to begin work to build and integrate the so-called electric vertical aircraft into its fleet.

He says they hope the vehicles will be operable for commercial use within five to 10 years, with the goal of making urban air travel more efficient, sustainable and affordable.

Sitnam says he is not yet sure how many aircraft will be added, but the company plans to integrate the electric helicopters into its current fleet.

He says they will be used primarily in urban environments because the technology is not yet advanced enough for heavy load utility work such as firefighting.

Helijet says it will continue its current routes but also intends to add new stops in the Pacific Northwest, including Seattle and Portland.