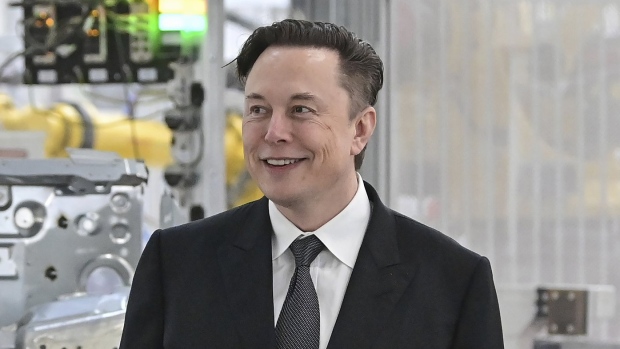 Tesla CEO Elon Musk attends the opening of the Tesla factory Berlin Brandenburg in Gruenheide, Germany on March 22, 2022. Musk says his deal to buy Twitter can’t ‘move forward’ unless the company shows public proof that less than 5% of the accounts on the platform are fake or spam. Musk made the comment in a reply to another user on Twitter early Tuesday, May 17, 2022. (Patrick Pleul/Pool Photo via AP, File)

LONDON - Tesla CEO Elon Musk promised that taking over Twitter would enable him to rid the social media platform of its annoying “spam bots.” Now he's arguing - without presenting any evidence - that there might be just too many of those automated accounts for the $44 billion deal to move ahead.

The sharp turnaround by the world's richest man makes little sense except as a method to scuttle or renegotiate a deal that's becoming increasingly costly for Musk, experts said. And while such hardball tactics aren't uncommon in corporate mergers, the way it's happening - in a highly public, seemingly erratic conversation on the very platform Musk wants to buy - has little precedent.

“That's the hook he's trying to grab onto as the reason for him to potentially walk away or negotiate the price down lower,” said Brian Quinn, an associate law professor at Boston College. “He is torpedoing the deal, trying to talk down the deal.”

Musk took to Twitter early Tuesday to say his deal to buy the company can't “move forward” unless the company shows public proof that fewer than 5% of the accounts on the social media platform are fake or spam. That followed a Friday tweet that said the deal was on hold pending more bot details - causing Twitter stock to plunge by nearly 10% - and Monday comments at a Miami conference suggesting he wanted a lower price for the company.

Experts say Musk can't unilaterally place the deal on hold, although that hasn't stopped him from acting as though he can. If he walks away, he could be on the hook for a $1 billion breakup fee.

Musk also spent much of Monday in a back-and-forth with Twitter CEO Parag Agrawal, who posted a series of tweets explaining his company's effort to fight bots and how it has consistently estimated that less than 5% of Twitter accounts are fake. It's a message that Twitter has been disclosing to the U.S. Securities and Exchange Commission for years, while also cautioning that its estimate might be too low.

In his tweet Tuesday, Musk said that “20% fake/spam accounts, while 4 times what Twitter claims, could be much higher. My offer was based on Twitter's SEC filings being accurate.”

He added: “Yesterday, Twitter's CEO publicly refused to show proof of 5%. This deal cannot move forward until he does.”

That kind of language makes no sense, Quinn said.

Getting cold feet about mergers is nothing new. It sometimes leads prospective buyers to look for changed conditions that can get them out of a deal or offering price.

It was the COVID-19 pandemic, in part, that led French luxury powerhouse LVMH, the parent company of Louis Vuitton and other apparel and wine brands, to say it was abandoning a planned takeover of U.S. jeweler Tiffany & Co. in 2020. Tiffany sued to enforce the deal, and LVMH lashed back. In the end, the famed jeweler agreed to a slightly reduced buyout price.

The Twitter sale agreement allows Musk to get out of the deal if there is a “material adverse effect” caused by the company. It defines that as a change that results in an adverse impact on Twitter's business or financial conditions.

Chester Spatt, a finance professor at Carnegie Mellon University and a former SEC chief economist, said Musk could claim that Twitter gave him wrong information about the number of spam bots.

Even if the excuse doesn't hold up, it can serve as a negotiating tactic with the corporate board that's trying to sell the company. “In a merger situation, a material adverse change is often the key to your ability to renegotiate the deal,” Spatt said.

Correct or not, Musk's latest complaint about the bot count hits upon a sore point for Twitter, which has long faced criticism about the lack of transparency around its bot numbers. In the aftermath of revelations about Russian use of social media to meddle in the 2016 U.S. presidential election, a group led by University of Southern California researcher Emilio Ferrara estimated in 2017 that between 9% and 15% of Twitter's active English-language accounts were bots.

In a blog post soon after, Twitter complained that such outside research “is often inaccurate and methodologically flawed.” Ferrara said that Twitter has taken a “frivolous” approach to this issue, especially compared to peers such as Facebook.

Twitter shares have dropped below the price they traded at before Musk unveiled his bid. Tesla shares are also down since the Twitter bid, which affects Musk's ability to raise money for the acquisition.

“It's quite natural for the buyer to want to cut a better deal,” Spatt said. Twitter could take Musk to court and argue that the sale contract remain in force, but could face significant legal fees, Spatt said.

The whole string of Musk tweets will likely draw scrutiny from the SEC, which will probably look at whether any false or misleading statements were made, Spatt said. “The SEC doesn't want to see manipulation of the public markets,” he said. “Their role is trying to help ensure that investors are getting a fair deal, to make sure the information out there is accurate.”

However, Musk has made his statements in the open, and although he may be negotiating that way, the SEC is more concerned with hidden aspects of a deal, Spratt said.

The bot problem also reflects a longtime fixation for Musk, who as one of Twitter's most active celebrity users is prone to having fake accounts mimicking his name and likeness to promote cryptocurrency scams. And he seems to think it's a problem for most other Twitter users, as well as advertisers who sell ads on the platform based on how many real people they expect will see them.

“Twitter claims that 95% of daily active users are real, unique humans,” he tweeted Tuesday. “Does anyone have that experience?”

At a Miami technology conference Monday, Musk estimated that at least 20% of Twitter's 229 million accounts are spam bots, a percentage he said was at the low end of his assessment. It was at the same All In Summit that Musk gave the strongest hint yet that he would like to pay less for Twitter than the $44 billion he agreed to last month.

“The chances of a deal ultimately getting done is not looking good now,” Wedbush Securities analyst Dan Ives, who covers both Twitter and Tesla, said in a research note. He estimated that there's “60%+ chance” that Musk ends up walking away from the deal and paying the $1 billion breakup fee.

To finance the acquisition, Musk pledged some of his Tesla shares, which have slumped in price by about a third since the deal was announced.

In tweets on Monday, Agrawal acknowledged that Twitter isn't perfect at catching bots. He wrote that every quarter, the company has made the estimate of less than 5% spam. “Our estimate is based on multiple human reviews of thousands of accounts that are sampled at random, consistently over time,” Agrawal wrote.

Estimates for the last four quarters were all well under 5%, he wrote. “The error margins on our estimates give us confidence in our public statements each quarter.”

Twitter has put the under 5% estimate in its quarterly filings with the SEC for at least the last two years, well before Musk made his offer in April. Over that same period, Twitter has also expressed uncertainty in its bot count, conceding that the estimate may be low.

AP writer Kelvin Chan in London contributed to this report.