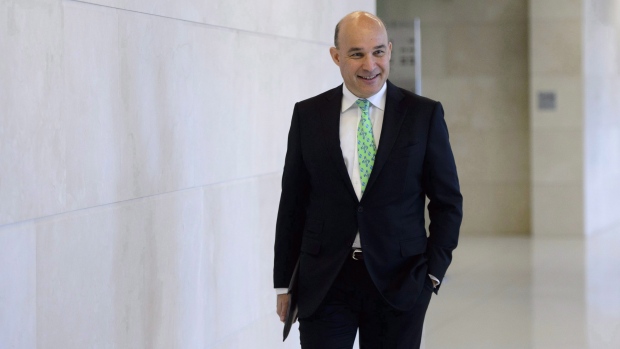 Jim Balsillie, Council of Canadian Innovators, arrives to appear as a witness at a Commons privacy and ethics committee in Ottawa on Thursday, May 10, 2018. THE CANADIAN PRESS/Sean Kilpatrick

TORONTO -- Ontario needs to do more to make sure the economic benefits of intellectual property produced in the province are captured, said a new report released Tuesday by the provincial government.

Intellectual property is a crucial and increasingly large driver of economic prosperity, according to the Ontario-government commissioned report by an expert panel chaired by Jim Balsillie.

"The digital transformation over the past 30 years has resulted in a new economic reality in which the basis of wealth and power is derived from the ownership of valuable intellectual property."

Balsillie, co-founder of what is now BlackBerry, has long been advocating for Canada to do more to protect and capture intellectual property created in the country.

The report notes that Ontario's GDP per capita has slipped compared with the U.S. in recent years as IP and data become increasingly dominant as economic values.

Post-secondary institutions and other IP creators in the province don't have high enough levels of understanding around intellectual property, with current educational resources voluntary and inaccessible, according to the report.

The panel recommends that the government set up a standardized online course so that those receiving public funds for "entrepreneurial activities" can better understand how to secure intellectual property and why that's important.

Other recommendations include establishing a centralized provincial resource for IP information and guidance, appointing a special advisor to set up a system to make sure those receiving public funds can generate IP for the benefit of the economy, and creating clear mandates in organizations on their roles and responsibilities in generating IP for the province.

These moves can help boost Ontario's prosperity and increase its competitiveness for "generations to come," according to the panel, which hosted public consultations and an online survey.

The government is reviewing the report and looking into next steps, said Ross Romano, Minister of Training, Colleges and Universities, and Vic Fedeli, Minister of Economic Development, Job Creation and Trade, in a joint statement.

"We look forward to taking action to better generate, protect, and share in the benefits of the high quality and cutting-edge discoveries and ideas coming out of our post-secondary institutions and broader innovation ecosystem."

This report by the Canadian Press was first published Feb. 11, 2020.