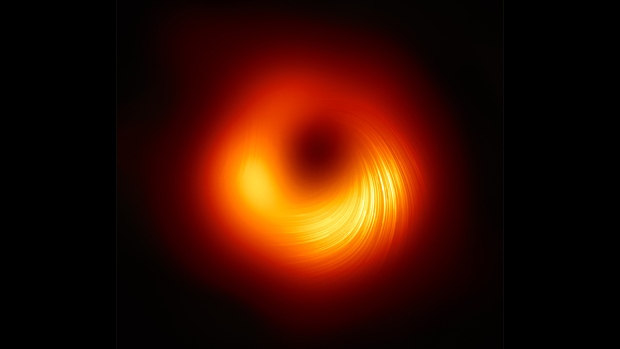 A global team of scientists that include a Canadian researcher have released a more detailed image of a black hole as shown in this handout image provided by EHT Collaboration. The Perimeter Institute for Theoretical Physics in Waterloo, Ont., says the new images shows the "crisp swirl" of light around the black hole as it appears in polarized light. THE CANADIAN PRESS/HO-EHT Collaboration

A team of international scientists that includes a Canadian researcher said it has mapped, for the first time, the magnetic fields surrounding a black hole.

The Event Horizon Telescope Collaboration team produced an image that shows electromagnetic fields that look like a “crisp swirl” of light around the black hole as it appears in polarized light.

The discovery will help astrophysicists better understand black holes and their profound effects on galaxies, said Avery Broderick, one of the team's researchers who works at Perimeter Institute for Theoretical Physics in Waterloo, Ont.

“We're watching this astrophysical drama, this twisting up of magnetic fields, building that spring at the bottom that's going to launch this jet out into this large universe and rule the fates of galaxies,” Broderick said in an interview.

The polarized image allows researchers to learn more about the magnetic fields surrounding the black hole in the M87 galaxy, he said.

They believe the research helps its understanding of how magnetic fields allow the black hole to “eat” matter and eject powerful energetic jets.

Two years ago the same team released the first-ever image of a black hole.

The international collaboration is composed of more than 300 researchers who compiled the image from eight Earth-based telescopes positioned around the world.

The new image is part of two related papers published Wednesday in The Astrophysical Journal.

The scientists have been working on the new project the past two years, Broderick said, ensuring what they were seeing was, in fact, real.

He said he and his team devised a new radioimaging method that helped show the electromagnetic fields.

There were five other teams that were using different methods to show the polarization, some tried and true, others novel.

“All six of these achieved very similar results,” he said.

“Only when we have this kind of replication across this many teams that we feel confident we're seeing something that's really in the sky and not an artifact of our analysis.”

What the team produced is comparable, in a sense, to the old high school experiment where students drop iron filings around a magnet bar, he explained.

The filings will line up in a unique fashion around the poles and illustrate the invisible magnetic field.

“What we have shown is those magnetic fields are not random, not just angled up in random directions, but very much like that bar magnet,” said Broderick, who is also a professor at the University of Waterloo.

“In some sense we have a polarized movie,” he said. “But the movie only has four frames.”

There is a difference between the first two images and the last two, he said.

“From the beginning of the week to the end of the week, the high polarization moves a bit,” Broderick said.

The image researchers captured is not of the black hole closest to Earth, however, but of one at the centre of neighbouring galaxy Messier 87 that was easier to observe by telescope. It is about six billion times the mass of our sun and located about 53 million light years from Earth. One light-year is equal to 9.5 trillion kilometres.

“The newly published polarized images are key to understanding how the magnetic field allows the black hole to `eat' matter and launch powerful jets,” said Andrew Chael, part of the team and a NASA Hubble Fellow at the Princeton Centre for Theoretical Science.

For Broderick, it's not that different than building a fence.

“It's a lot of work, a lot of sweat and frustration digging the post holes and screwing the whole thing together and making sure everything is plum, and while you're doing that you're focused on the mundane and onerous tasks,” he said.

“But then you get to step back when you're finished and you have a nice looking fence that's not too crooked and you feel an immense measure of pride and that's where we are today.”