Residents in some Canadian municipalities can pay property taxes with Bitcoin 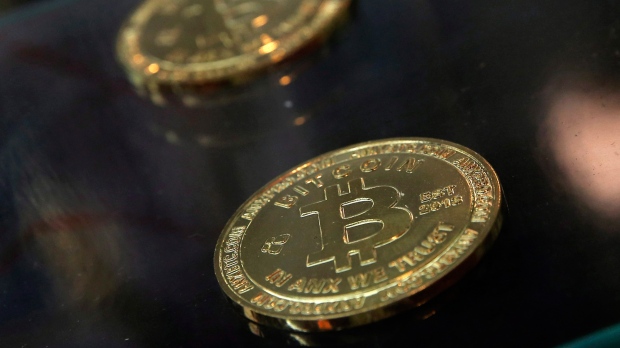 FILE- In this Dec. 8, 2017, file photo, coins are displayed next to a Bitcoin ATM in Hong Kong (AP Photo/Kin Cheung, File)

Residents in a handful of Canadian municipalities have a new, if risky, payment option for property taxes.

The cities of Richmond Hill and Innisfil, both north of Toronto, have become the first in the country to accept cryptocurrency -- a digital-based payment system operating without the central oversight of banks or credit card companies -- for property tax payments. Other cities, including Toronto, have explored the option, but have yet to implement it.

The meteoric rise and subsequent crash of cryptocurrency prices in early 2018, along with the collapse of the QuadrigaCX cryptocurrency exchange after the death of its founder last December, are stark illustrations of the inherent risks in the space.

Billed early on as an alternative to government-regulated tender, cryptocurrencies have yet to gain traction in retail transactions due to delayed processing times of up to ten minutes. Additionally, security remains an issue as exchanges are routinely targeted by hackers, leaving customers vulnerable and without safeguards such as deposit insurance that are common with regular bank accounts.

With the option being so new and cryptocurrency still largely unused by most Canadians, Maggie Xu, a 30-year-old cryptocurrency expert at Toronto-based blockchain company Decentral, shared what those thinking of paying for property taxes this way should know.

There are more than 1,300 cryptocurrencies, including Bitcoin, Ethereum, Litecoin and XRP that all differ in value and transaction speed. One Bitcoin, for example, is currently worth about $13,500 and takes roughly 10 minutes to be sent.

Many, including Bank of Canada governor Stephen Poloz, have expressed concerns with cryptocurrencies because they are decentralized, meaning there is no central authority overseeing them. However, five per cent of Canadians still own some form of cryptocurrency, according to a 2017 study from the bank.

Most Canadian municipalities accepting cryptocurrency only accept Bitcoin for now, but are looking to expand their options, so Xu stresses the need to research what kind of cryptocurrency you can use before buying.

To make a purchase, Xu says to register with a credible digital currency platform like Coinberry, Coinsquare or Coinbase, which allows you to buy cryptocurrency through electronic bank transfer, credit card or wire transfer and store it what they call a digital "wallet." Richmond Hill and Innisfil have both partnered with Coinberry.

The cryptocurrency buying process, Xu says, often involves filling out your personal information and providing some identification, which helps the platforms weed out potential money launderers.

"When you want to pay for your property taxes, (the city) will have a special address, so you go into your wallet, copy and paste the address and that's it," says Xu. "It is pretty simple."

If you're having trouble, Xu says YouTube is rife with videos demonstrating how to use cryptocurrency and most municipalities accepting it have explainers on their websites.

The value of most cryptocurrencies fluctuates like a regular currency, says Xu. Plus, there's often a delay in processing cryptocurrency transactions because of the large volume of them occurring.

It's important to know that if the value of your cryptocurrency drops between when you made a payment and when your transaction was processed, many municipalities will require you to make up the difference.

If you don't want to deal with fluctuations and your municipality accepts it, Xu says you can look to stablecoins, including Gemini Dollar, Tether and Dai.

Because cryptocurrencies are unregulated, finding someone to help you if something goes wrong can be tricky.

Some municipalities offer contacts and online FAQs to help troubleshoot.

Xu's advice is to "go to the company's support page and either call or email the customer support team with detailed questions."