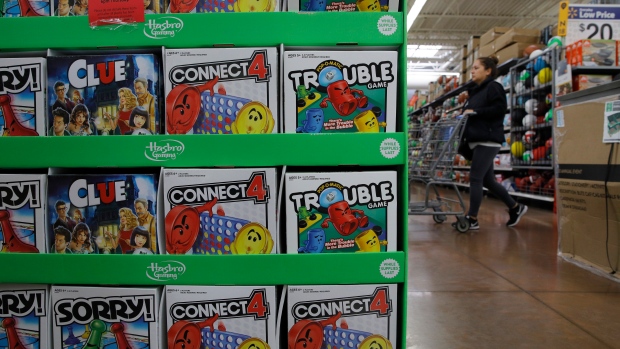 Hasbro toys are on display at a Walmart Supercenter, Wednesday, Nov. 27, 2019, in Las Vegas. Black Friday once again kicks off the start of the holiday shopping season. But it will be the shortest season since 2013 because of Thanksgiving falling on the fourth Thursday in November, the latest possible date it can be. (AP Photo/John Locher)

TORONTO - On the eve of the start of the U.S. holiday shopping season, the prospect for 2019 toy sales has worsened following a slow start to the fourth quarter, an industry analyst said Wednesday.

BMO analyst Gerrick Johnson says full-year U.S. toy retail sales are expected to decrease by two per cent from 2018, compared with his prior forecast of them being flat.

The industry is down 5.5 per cent through the first nine months of the year, a bigger decline than BMO anticipated.

Sales compared to a year ago when retailers offered aggressive promotions in their fight for the 15 per cent of the market that was up for grabs with the closure of Toys R Us stores in the United States.

With more inventory at stores and in warehouses, as well as a shift to online shopping, store sales need to increase sharply to avoid liquidations at the end of the quarter that would reduce margins, he said.