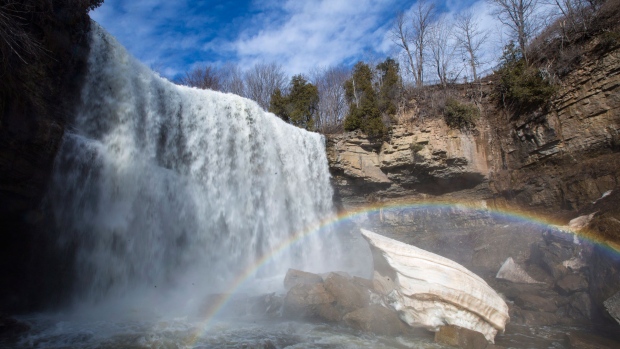 Webster Falls in Hamilton, Ontario on Friday, March 2, 2018. Although Hamilton has long been known as Canada's "steel city" because it's home to a large manufacturing industry, natural attractions are becoming part of its revamped image. THE CANADIAN PRESS/Peter Power

HAMILTON - On a brisk afternoon in early March, the water from Hamilton's Tew Falls crashes onto a snow-covered rock. Icicles hang on either side of the ribbon waterfall, and snow is sprinkled on ledges in the gorge.

The falls are a smaller, lower-key alternative to the juggernaut of Niagara Falls, about an hour's drive southeast. They're visible from a platform that's easily accessible from a close by parking lot.

Although Hamilton has long been known as Canada's “steel city” because it's home to a large manufacturing industry, natural attractions are becoming part of its revamped image.

Due to its position along the Niagara Escarpment, Hamilton abounds with waterfalls. City officials say it has “the highest number of waterfalls of any urban area of its size” - at least a hundred of them are scattered across the city, with varying degrees of accessibility.

Some, like Tew Falls and nearby Webster Falls have platforms for easy viewing, while others require a bit of a hike - though enthusiasts insist the views are worth it.

“For some reason, the waterfalls just fill me up,” says Jodi Voutour, who tries to make it out to some of Hamilton's waterfalls at least twice a week. “They lift my spirits. There's something cleansing and releasing about them.”

The 10-year resident of the city says she prefers the falls that are harder to access, though would-be hikers have to be careful not to slip and fall.

“People should continue to visit the waterfalls, but also respect the land and be aware of their footing so we don't have as many injuries,” she says.

The city itself instructs visitors to stay away from the area right beside waterfalls, as they are typically near a very steep drop and the land can become unstable. It also advises that some areas are prone to flash flooding, while others have polluted water and aren't suitable for swimming.

But the city also acknowledges the falls' potential to draw visitors. In 2007, an official report ranked the waterfalls based on accessibility, visual appeal and “awe-factor.”

In the winter, the falls are an icy respite from the city. But after a few months, they're surrounded by lush greenery.

It's in stark contrast to the image Hamilton puts forth to the rest of the country.

“When people think of Hamilton, they think of dirty, industrial steel town, right? And actually, it's so much more than industrial and dirt and grime,” Voutour says. “If you come to these waterfalls, there's so many hidden beauties, you wouldn't even think.”

“I know during the summer a lot of the waterfalls are so crowded, so overpopulated. I choose to go in the downtimes ... early in the mornings or in the wintertime, when not as many people venture out,” Voutour says.

She and one of her friends regularly head to a waterfall early in the morning and bring along an MP3 player with a portable speaker, she says.

“We skip along and dance our little booties off,” she says with a laugh.

Webster Falls Hamilton, Ontario on Friday, March 2, 2018. Although Hamilton has long been known as Canada's "steel city" because it's home to a large manufacturing industry, natural attractions are becoming part of its revamped image.THE CANADIAN PRESS/Peter Power