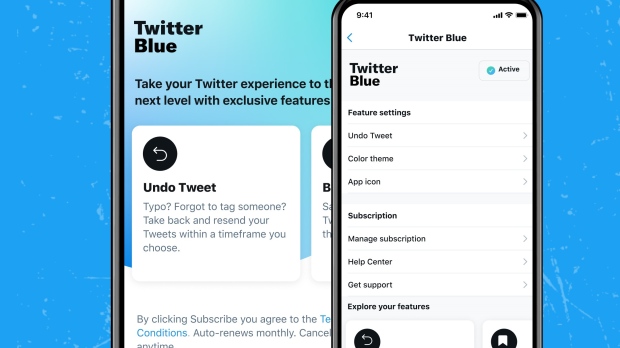 The sign-up page for Twitter Blue is shown in a screengrab. Canadians will be the first to get their fingers on a slew of new Twitter features, but for the first time ever, that access will come with a fee. THE CANADIAN PRESS/HO

TORONTO - Canadians will be among the first Twitter users with access to a host of new features, but for the first time the offerings will come with a fee.

The San Francisco-based tech giant unveiled Twitter Blue - its first paid subscription product - on Thursday. The long-rumoured offering will cost $3.49 a month for Canadians and be available to iOS users in the country and Australia first before reaching the U.S. and international destinations later this year.

Twitter Blue gives subscribers the ability to create folders for bookmarked tweets, access a reader mode that presents posts and threads in a decluttered fashion and receive dedicated and faster customer support.

Subscribers will also get access to an “undo” feature that lets them set a timer of up to 30 seconds to edit a tweet, reply or thread before it gets posted.

The company says it has no plans to eliminate the free version of Twitter it has long offered users.

While Twitter's platform is intended to target a broad swath of users, the company's senior director of product management said Twitter Blue was designed for a very specific set of consumers - so-called super users who are highly engaged with the platform and spend a lot of time on it for either leisure or work purposes.

“One of the things that we've been thinking about a lot is our most engaged and our most passionate Twitter super users who often want to take their experiences to the next level. We don't always build things for their needs,” Sara Beykpour told The Canadian Press.

“Twitter Blue ... gives us an opportunity to provide a paid subscription product to really meet the needs of these passionate, super users.”

It chose Canada for the launch, Beykpour said, because there is a strong pool of super users seeking new features.

The market was also chosen because it has hosted previous pilots including a “hide replies” test, and is home to an engineering hub the company plans to open in Toronto, said Paul Burns, managing director of Twitter Canada.

Richard Lachman, a digital media professor at Ryerson University, believes the more likely reason Canada was chosen was because the market is like “America lite” with its English-speaking and multicultural population.

“You want to test something out in a smaller market that matches as close as possible to your larger market and we represent a lot of bigger markets,” he said.

He also considers Twitter Blue a revenue generation “experiment” because it comes as tech giants face increasing calls for regulation and concerns over their reliance on advertising to make money.

The Liberal government in Canada, for example, has long been teasing new legislation that could require social media networks to pay taxes and remove hateful content from their platforms with 24 hours of it being flagged.

Meanwhile, Apple has taken aim at advertising criticisms with an April iOS update for iPhones and iPads, forcing apps like Twitter to have consent from individual users before they can track anyone across apps.

In the first quarter of 2021 alone, Twitter made US$899 million on advertising revenue.

The Apple update will have a “modest” impact on advertising revenues, Twitter said in a note to shareholders.

When asked whether Twitter Blue is meant to introduce revenue streams that could be more reliable than advertising, Beykpour pointed out the company's first-quarter advertising revenue is a 32 per cent increase from the same period last year and said the company plans to diversify its revenue streams.

“It's a smart move to do that and advertising is one part of that diversity but having more lines will help us invest in our future,” she said.

As part of that push, Twitter acquired newsletter publisher Revue in January and Scroll, a subscription service that removes advertising from news sites, in May.

Twitter's approach to paid offerings follows similar moves from YouTube, which operates a premium service removing ads during videos for $11.99.

By offering its own paid option, Beykpour hopes Twitter can learn even more about what users want from their social media experiences.

“Everyone is always very vocal about their opinions on Twitter, but our super users are particularly helpful, so I think we're going to get a lot of great signals,” she said.

Lachman thinks the insights the company will get from Twitter Blue will be invaluable, but even with a small price, he doesn't expect everyone to flock to the product.

“Trying to get the mass number of Twitter users to switch from free to paid probably will never happen,” he said.

“It's possible that power users will want (this), but that's a small number of people, so I don't see this as a massive shift in the business model.”