'Vaxxed and waxed, baby!': Summer heats up for single-dosed singles 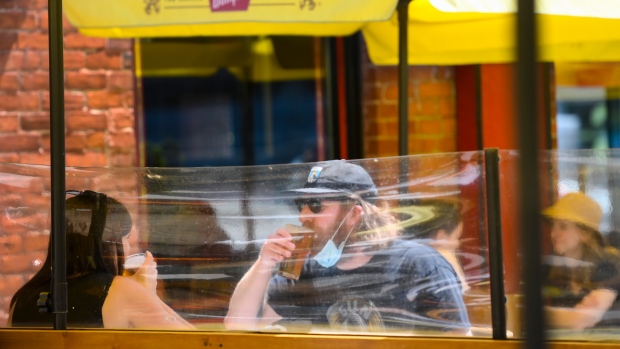 People enjoys drinks and friends on outdoor patios during the COVID-19 pandemic in downtown Toronto on Friday, June 11, 2021. THE CANADIAN PRESS/Nathan Denette

It's been a long lockdown on love for Emma Sykora. But as temperatures climb and more Canadians roll up their sleeves for the first dose of the COVID-19 vaccine, Sykora is starting to think she has a shot at something special this summer.

The 33-year-old in Toronto became single near the start of the COVID-19 crisis. Since then, Sykora's interest in romance has waxed and waned with each wave of the pandemic, but no relationship prospect proved to be worth the risk of infection.

But lately, she says, the escalation of Canada's vaccine rollout seems to have injected a long-awaited dose of passion into the dating scene.

Sykora said her dating apps have been flooded with matches and messages -- many touting vaccination as part of their pickup strategies -- as single-dosed singles emerge from extended contagion-forced chastity.

"It's like a Rumspringa for partially vaccinated millennials," she says, referring to the Amish coming-of-age period in which teenagers venture into the world of vice.

"I am hoping that I'll be able to embark on something new and exciting and be able to push it forward in a way I wasn't able to during the first year and a half of this."

But experts warn that the one-dose summer of love may not be as hot and heavy as some would hope between COVID-19 safety concerns, the evolving etiquette of vaccine disclosure and anxiety about putting yourself out there after prolonged isolation.

"It's not all free love yet," says Dionne Gesink, a professor of epidemiology at University of Toronto's Dalla Lana School of Public Health. "It's cautious optimism that maybe by fall or winter, it will be a winter of love."

Whether you're looking for love or lust, partial vaccination doesn't offer enough protection to safely play the field, says Gesink.

Evidence suggests that a single dose is less effective against the highly infectious Delta variant, which is poised to become the dominant strain of the virus in some regions, she says.

Moreover, while vaccines provide personal protection against COVID-19, the science is still out on how they impact transmission, says Gesink.

Given these risks, she recommends daters be selective about meeting up with potential paramours.

However, Gesink advises against subjecting matches to a pre-date intake form of personal health questions. Rather, she encourages people to broach conversations about COVID-19 prevention and vaccination as part of the "getting to know you" process.

"You might want to approach it from a more philosophical view of, where do you stand on this stuff," she says. "That will give you a lot more information … and a better sense of the person."

For relationship-seekers, pandemic-prolonged courtship could foster deeper connections, says Gesink. But those looking for something a little more casual may have to get creative about finding arousing alternatives to in-person sexual contact, she says.

"It can feel frustrating, because what we want to have is relationship and sex. But what we can have is time spent getting to know other people," says Gesink. "It's a source of tension, but consider it foreplay."

Many online daters are taking a more straightforward approach by disclosing their vaccination status on their profiles, some even boasting brand allegiances like "Pfizer gang!" or "team Moderna" alongside their zodiac signs.

Christopher Dietzel, a post-doctoral fellow at Dalhousie University's Sexual Health and Gender Lab, says the pandemic has turned dating apps into public health tools that could be used to promote vaccination as a way to woo more matches.

In the United States and United Kingdom, governments have teamed up with dating platforms to offer vaccination badges or even free perks to users who roll up their sleeves.

But framing vaccination as a romantic "status symbol" could invite complications, says Dietzel.

It's also possible that immunization will become another criteria that swipers use to filter out unfit suitors, similar to age or political persuasion, he says.

Dietzel says it's been promising to see how the pandemic has opened up communication about consent across a variety of contexts, including COVID-19, sex and intimacy.

But people shouldn't feel pressure to jump back into the dating pool just because they've had their first jab, he says.

Even as lockdown measures lift in many parts of the country, some romantics may feel rusty or socially awkward as part of a phenomenon psychologists call "re-entry anxiety," Dietzel says.

"Be careful about taking it at a pace that makes sense for you," he says. "If this is something you in any way feel uncomfortable or unsafe doing, don't do it."

For Chelsea Jones, vaccination has pitted her desire to date against her isolation-inflamed anxieties about meeting someone new.

As services reopened in White Rock, B.C., the 43-year-old says she rebooted her dating apps to see if she could find a partner for a potential patio date.

But this foray turned out to be a "failure to launch," Jones says. Discouraged by this sense of rejection, she deactivated her dating accounts, deciding it was best she put affairs of the heart on the back burner so she could focus on her mental health.

This report by The Canadian Press was first published June 13, 2021.