‘We basically got to skip the entire line’: Toronto Pearson travellers can use this app when flying to the U.S. 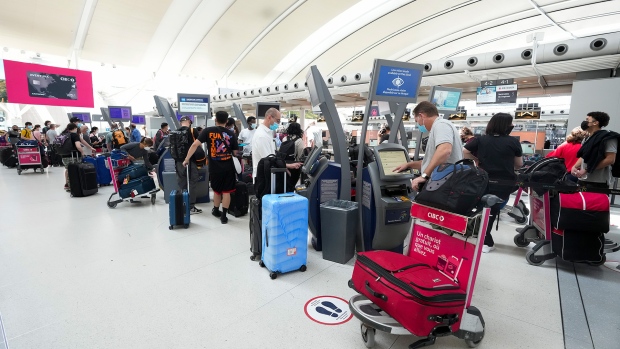 People wait in line to check in at Pearson International Airport in Toronto on Thursday, May 12, 2022. The organization that runs the airport is "urgently" calling on the federal government to help alleviate major delays affecting passengers at security and clearance points amid a shortage of staff. THE CANADIAN PRESS/Nathan Denette

Those travelling through Toronto Pearson International Airport to select U.S. destinations might be able to avoid long lines at customs by using this app.

U.S.Customs and Border Protection (CBP)’s Mobile Passport Control (MPC) app permits eligible travellers to submit all of their necessary travel information, like their passport and customs declaration form, before crossing the border.

According to CBP, travellers who use this app can also store their information “so it will be readily available for future international travel,” which could result in “less congestion” at customs.

As of Aug. 30, travellers at two Canadian airports–Pearson and Montreal Trudeau International Airport–can use the mobile app at preclearance at customs or when they land in the U.S.

Travelling to the U.S. from Pearson? Download @cbp’s Mobile Passport Control app and submit your information digitally before you travel for a smoother departures experience. https://t.co/DmxNJvXGaf

Jade Horinga was flying to St. Louis, MO, on Sept. 6, when she found out about the app on TikTok.

“I didn’t really know what to expect [or] if it was even going to work, and it was amazing,” Horinga told CTV News Toronto. “There was nobody in the MPC line at Pearson and there was a huge line for customs, and we basically got to skip the entire line.”

How does it work?

According to CBP, as soon as the MPC app is downloaded, eligible travellers can digitally fill out their passport information.

Once everything is filled in, travellers can pick what airport and terminal they are arriving at, snap a selfie, and answer a series of questions. The mobile app can also be used at sea ports.

“It probably took me less than a minute to fill out the questions,” Horinga said. “Then we got a receipt and that receipt was valid for four hours. We just showed the receipt to the officer and went through.”

According to CBP, the receipt is an encrypted QR code that travellers can show to a customs officer for final inspection.

Up to 12 profiles can be created on the MPC app, so families from a single household can submit just one form.

“It also eliminates the need for a declaration form because travellers can answer the CBP inspection-related questions electronically via their smartphone or tablet prior to arriving at Customs,” a news release reads.

At the moment, the app can only be used at the following 31 U.S.airports:

CBP says the program will expand to Vancouver on Sept. 19.

How secure is it?

According to the CBP, all travel documents submitted to the app are sent through “secure encryption protocols.”

“The information you enter on the authorized applications are securely transmitted to CBP which sends a response to the apps, generating the electronic receipt you display to the officer.”

Travellers can choose to store their profile on their phones for future travel, or they can choose to delete it after their vacation.