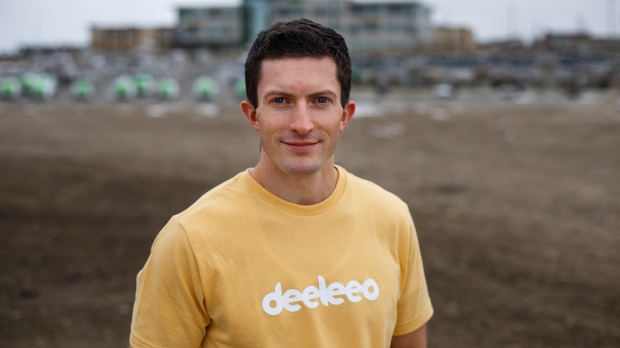 TORONTO - Olympic gymnast Jackson Payne has been a Kijiji and Facebook Marketplace aficionado for years, but shortly after negotiating a price on whatever he was selling on the platforms, he always encountered a conundrum: getting the item to its new owner.

So when he retired from his athletic career at the end of August, he decided it was time to do something about it.

That something is Deeleeo, an Edmonton-based app that aims to bring convenience and affordability to the courier industry by letting anyone sign up to transport goods.

Deeleeo, which recently had its soft launch, has been used by locals to speedily drop off presents or loan out items to friends and family and by small businesses to get purchases to buyers.

Experts say it's an opportune time for peer-to-peer or crowdsourced delivery services specializing in non-perishable goods because many Canadians are staying home and such apps allow consumers to send items without a requiring a mask or a trip outdoors.

It's a reversal from a few years ago when similar services were calling it quits, citing low demand and more interest in food delivery.

The most high profile courier service to close was Uber Technologies Inc.'s Rush, which operated in San Francisco, New York and Chicago between 2014 to 2018. The company chalked up the closure as a “bold bet” that didn't work out and refocused on UberEats.

Courier DHL and a group of German design students explored a similar service called Bring Buddy, but it was cancelled seven years ago and the company hasn't used crowdsourcing since.

Even Walmart considered using customers to drop off U.S. orders, but abandoned the idea.

Others thought crowdsourced deliveries still had potential, but zeroed in on the commercial markets by undercutting postal services and big-name shipping companies with cheaper prices and lower wait times.

Payne insists there is a market for his service because it can get deliveries where they need to go quicker or more cheaply than traditional options.

Small packages going a short distance can be delivered for as low as $9, while bigger items needing to travel hundreds of kilometres can cost $70, he said.

Couriers earn between 75 and 80 per cent of the delivery fee and make premiums for the more items they deliver.

“I have family members that don't have jobs right now and I see the struggle, so if Deeleeo can provide a temporary, part-time or even full-time solution to raising the funds they need to support their family, I'm happy to see that,” Payne said.

Despite its Rush troubles, it launched Uber Connect, a Deeleeo competitor, at the end of May in Vancouver, Calgary, Edmonton, Toronto, Ottawa and Montreal.

A 2016 McKinsey study valued the global parcel delivery market at more than $108 billion and said it's growing so fast that shipping volumes could double by 2026.

While crowd-based shipping models can be attractive because of their affordability, the report warned that such services will likely only play a minor role in the industry because they can be fraught with legal issues and it can be difficult to source drivers during peak periods if they sign up with multiple companies.

McKinsey, however, suggested the services could excel at managing “ultra peak demand” like the December holiday rush that already prompted Canada Post to plead with consumers to get their parcels shipped early.

Holiday seasons like Valentine's Day and Christmas have been a boon for years, but the pandemic is producing a surge too, said Kristine Hubbard, operations manager at Beck, a Toronto taxi service that has offered deliveries through its cabs for as long as she can remember.

“We're finding, in the interest of not wanting to go out or be in direct contact with family members, people will send some cookies they've made or maybe it's a blanket or maybe you know it's some tool they're going to lend,” Hubbard said.

Beck follows the city-mandated $10 parcel minimum and charges that rate for the first three kilometres and $2.50 for every additional kilometre.

There are no hard rules around what it will ship. Most items, including food or forgotten house or car keys, are fine, but Hubbard has had to veto some requests.

“We've been asked to transport a snake. That was a hard no,” she said.

“Some people have asked to send babies alone.”

While such services are fulfilling an important need during the health crisis, Wendy Cukier, a research lead at both the Future Skills Centre and Women Entrepreneurship Knowledge Hub, worries about their affects on the workforce.

Uber and Deeleeo - much like food delivery services - rely on independent contractors and were developed to offer convenience to consumers and a money generator for people out of work or looking to pad their incomes.

She wishes services and regulators thought more about how big an impact universal basic income and portable benefits, which move with people as they change jobs or employers, can have on workers and the economy.

“Make no mistake about it some employers are constructing new arrangements so that they don't have to invest in long-term employees,” she said.

“We have to make sure we don't leave anyone behind.”

This report by The Canadian Press was first published Nov. 1, 2020.