Locked-out NHLers get taste of what they're missing 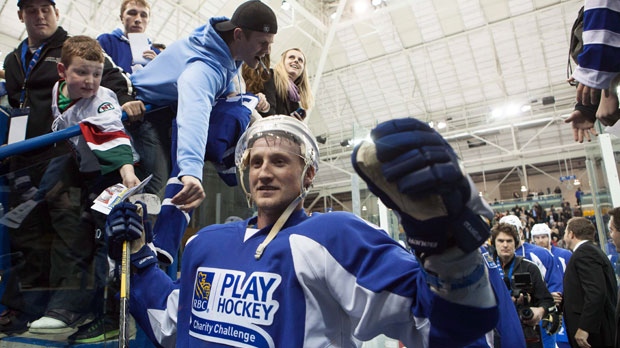 TORONTO -- For one night, Steven Stamkos and 38 other locked-out NHL players were back where they belonged.

The passes might not have been as crisp, the shifts weren't nearly as intense and the atmosphere wasn't quite up to par with a typical NHL arena, but the joy of being back on the ice was undeniable for the participants in Wednesday's charity game at the former Maple Leaf Gardens.

And reminders of the NHL -- last seen on ice in June, when the L.A. Kings lifted the Stanley Cup -- were everywhere to be found. The most interesting sight was in the stands, where a good portion of the 2,600 fans in the crowd dusted off sweaters that have been collecting dust during the lockout.

Among the teams represented? The Habs, Red Wings, Maple Leafs, Oilers, Bruins, Devils, Penguins, Flames and, naturally, a few Lightning jerseys emblazoned with "No. 91" and "Stamkos."

"That was outstanding," said Stamkos. "Obviously, the fans are hurting through this process. I've had an opportunity to play in two charity games (during the lockout) -- the Hurricane Sandy relief one in Atlantic City (last month) and that was an unbelievable turnout. It was a big venue and we sold that out.

"This one was a little smaller one, but still the great support from the fans -- that's why we have the best fans in all of sports in my opinion and it was great to play in front of them."

For the record, the Stamkos side came out on top of P.K. Subban's team 14-10, but the only number anyone was concerned about afterwards was the $100,000 raised for the NHLPA's Goals & Dreams Fund and RBC's Play Hockey initiative.

It was clear from the get-go that this evening was about the people who paid $25 to watch a game of shinny. Some players threw sticks into the crowd during the warmup while others launched NHLPA hats and shirts over the glass during stoppages in play.

The game was played at the newly minted Mattamy Athletic Centre, where Ryerson University's hockey teams now play. The building opened earlier this year after sitting dormant for more than a decade after the Maple Leafs last called it home in February 1999.

"It was kind of neat, especially being at the old Maple Leaf Gardens," said Anaheim Ducks forward Daniel Winnik. "I remember sitting up in the stands, up in the green section with my tyke team watching a game. We went to a game and Wendel Clark fought off the first faceoff.

"It was pretty neat playing in the rink -- I know it's very different than what it used to be -- but the history's in the building still."

There was no history to be made in the charity game. The hockey wasn't particularly pretty.

Some of the participants have stayed sharp during the lockout by playing in Europe while others have only been taking part in informal skates.

"You can tell some guys have been on the ice more than others," said Subban.

Added Michael Del Zotto, who recently returned from Switzerland: "Some guys were coming back to the bench huffing and puffing."

Attention in the coming days will quickly turn back to the possibility of the NHLPA filing for disclaimer of interest -- some players were chatting about that in the hallway after the game -- and the status of stalled collective bargaining negotiations.

But at least for a few hours the hockey players were back where they are most comfortable.

"There's a lot of people that are obviously missing hockey, but no one more than us," said Maple Leafs forward Joffrey Lupul. "It's really a good feeling to get back out there and be around some of my teammates and just do a good thing for charity at the same time."