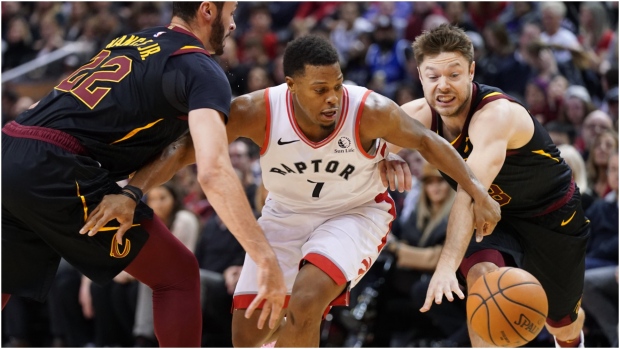 TORONTO -- Kyle Lowry scored 24 points while Serge Ibaka had 20 points and 10 rebounds and the Toronto Raptors notched an easy 117-97 victory over the Cleveland Cavaliers on New Year's Eve.

Six Raptors scored in double figures. Terence Davis matched his career high with 19 points, while Rondae Hollis-Jefferson had 14, and Fred VanVleet and OG Anunoby had 12 points apiece for the Raptors (23-11).

Collin Sexton had 22 points to top the Cavaliers (10-23), while Tristan Thompson of Brampton, Ont., had 14 points and 11 rebounds.

The Cavaliers were one of the season's biggest draws before LeBron James bolted for Los Angeles, but the Cavs arrived in Toronto on Tuesday way down in 12th in the Eastern Conference. As predicted, they posed little trouble for the Raptors, who recorded their fifth consecutive home win over Cleveland, a win streak that included a 133-113 rout here two weeks ago.

Coming off a one-point loss to Oklahoma City two nights earlier, the Raptors cobbled together a double-digit lead in the second quarter Tuesday, and by the time Ibaka hit a hook shot with 3:33 to play in the third, Toronto was up by 21. The Raptors led 86-69 to start the fourth in front of a festive capacity crowd of 19,800 at Scotiabank Arena.

The Raptors didn't let up in the fourth. Davis injected some life into the crowd with a rim-hanging dunk with five minutes to play, but with the game well in hand, plenty of fans departed soon after to beat the crowd.

Three-point shooting was a big difference on the night. The Raptors connected on 43.6 per cent from long distance, while the Cavs were good on just 26.3 per cent.

Anunoby, who lost his spot in the starting lineup to Hollis-Jefferson, nailed three consecutive shots when he subbed in, including a catch-and-shoot three-pointer from Lowry with 1.8 seconds left in the first quarter. The basket sent the Raptors into the second quarter with a 27-25 lead.

Lowry led the way with 11 points in the second, and his 33-footer put the Raptors up by 14 points late in the quarter. A running layup by Hollis-Jefferson with 1.6 seconds left in the half had Toronto up 59-43 at halftime.

The game ended the busiest month of the season for Toronto, with 16 games including three back-to-back sets. The Raptors tip off 2020 in Miami on Thursday and Brooklyn on Saturday before returning home to host Portland on Jan. 7.

This report by The Canadian Press was first published on Dec. 31, 2019.