Man, 25, dies after being shot by police

A 25-year-old man has died after being shot by Toronto police in the east end on Sunday afternoon.

The victim --Pickering resident Reyal Jensen Jardine-Douglas -- was shot on Biscayne Boulevard, near Victoria Park and Eglinton Avenues at about 3:30 p.m. He was rushed to hospital with missing vital signs.

According to a witness from the scene, the victim was approached by an officer after getting off a bus. He was then shot when he turned to run and reach into his pocket.

A knife could be seen lying at the scene after the shooting.

There are also reports that police were called to the scene about an altercation on the bus. The Special Investigations Unit is handling the case. 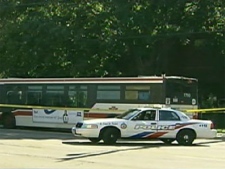 One person is in hospital following an altercation with police.