Toronto police said officers were called to a home on Rankin Crescent, near Lansdowne Avenue and Bloor Street, shortly before 6 a.m.

At least one neighbour called 911 to report a man striking small raccoons with "a shovel-type" garden tool in his yard while a mother raccoon attempted to rescue her offspring, police said.

The neighbour told CP24 that he was startled by wild animals' shrieks, so he looked outside to find the suspect beating the raccoons with a red-coloured spade.

"The screaming from the first baby was horrific, it was loud," said the neighbour, who confronted the man.

During that encounter, the neighbour said, the suspect claimed the raccoons were destroying his prized garden.

Police arrived a short time later. Officers found an injured baby raccoon in the corner of the yard. Two other raccoons were rescued by their mother during the incident.

A spokesperson for Toronto Animal Services tells CP24 that one injured raccoon was taken from the scene to be examined.

Despite suffering fractures to its leg, that raccoon is still "feisty" and appears to be doing well, the spokesperson said.

The animal will be rehabilitated at the Procyon Wildlife centre in Beeton. Once he heals in a few weeks he'll be returned to the Toronto neighbourhood he was found in.

Police haven't commented on the motive.

Meanwhile, Dong Nguyen is charged with cruelty to animals and weapons dangerous. police said. He was arrested at the scene and is scheduled to appear in court July 13.

Homeowners often encounter problems with raccoons and other wildlife in the spring, but police are discouraging people from taking the matter into their own hands.

The use of body gripping traps could result in criminal charges, as well.

A raccoon's diet includes everything from grubs and insects to small rodents and vegetables, and they are known to eat from garbage containers and composts.

Because they are attracted to lawns, gardens and trash bins, the city is offering these tips to prevent raccoons from destroying your property or making a mess:

Raccoons are likely to return again and again if they find food in a garbage container, compost or pet food that is left outside, the city said.

With a report from CP24's Sue Sgambati 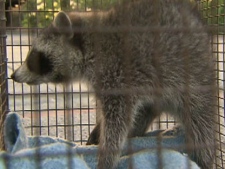 An injured raccoon is transported by Toronto Animal Services after it was allegedly beaten by a man in a yard near Bloor Street West and Lansdowne Avenue on Wednesday, June 1, 2011.