Homicide detectives are investigating after a man was found dead in an Oakville business Wednesday morning.

Halton Regional Police say the man's body was discovered inside a commercial building at 1244 Speers Rd. at about 11:50 a.m.

A neighbouring business owner says three people came to his door and asked him to call 911 after they found the victim.

A husky puppy was found alive inside the business.

The man's cause of death hasn't been determined.

Police didn't reveal the man's name and released no information about the suspect or suspects.

The homicide is the second in Oakville and fifth in Halton in 2011. 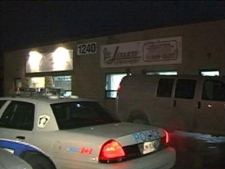 Homicide detectives are investigating after a man was found dead in an Oakville business Wednesday, Feb. 16, 2011.