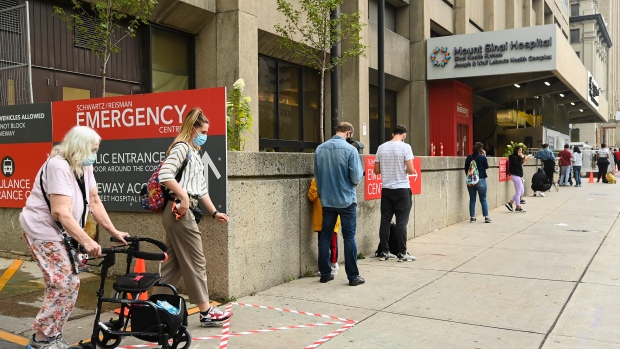 The majority of assessment centres will not be offering COVID-19 tests today as they get set to transition to an appointment-only model as of tomorrow.

Ontario’s 153 assessment centres stopped accepting walk-ins as of Sunday after weeks of long lineups and reports of some people being turned away entirely due to capacity issues.

In Toronto, nearly one-quarter of all assessment centres were already taking appointments and are continuing to operate today on that basis.

The Ministry of Health has said that other assessment centres which weren’t previously set up for appointments will be closed today so that they can have “the necessary time to reset, deep clean and ensure preparedness for the new appointment-based model.”

The ministry says that the pause will also help Ontario’s lab network “make significant” process in cutting down on a backlog that surpassed 90,000 as recently as Friday but has since been reduced to about 68,000.

Speaking with CP24 on Monday morning, Medical Laboratory Technicians Association of Ontario CEO Michelle Hoad said that the hope is that by transitioning to an appointment-only system the province will be able to better prioritize test subjects and ensure that priority groups, like healthcare workers and people with known exposure can get their results quicker.

Hoad, however, said that lab capacity will continue to be a challenge.

“We started with five testing labs and we are over 50 now. There are over 182 labs that are accredited that could potentially do testing but it is not that simple,” she said. “There is a large global demand for the machines that do the tests so there is backlog with that and there is also backlog of the reagent used in the test so even if we had 60 or 70 more labs come on line we would still be dealing with the global shortage of these products.”

Fewer than one-third of all COVID-19 tests (32 per cent) being conducted in Toronto are being turned around in 48 hours or less compared to 77 per cent just two weeks ago (Sept. 21).

The percentage of tests being turned around in 24 hours or less, meanwhile, now stands at just 14 per cent. That is compared to Toronto Public Health’s goal of 60 per cent.

Hoad told CP24 that Ontario’s lab workers are working 24/7 to turn around tests and cut through the backlog but she said that they are facing a number of challenges, including machines “that are not set up to run 24/7” and are frequently going down or requiring maintenance.

She said that staffing has also been an issue with about 70 per cent of hospital-based labs entering the pandemic with an insufficient number of employees.

“I think it is important that we in Ontario understand that it is not normal times for anyone,” she said. “When is the last time we have seen thousands of people standing outside of assessment centres in our lifetime? The answer is never.”

Most Toronto assessment centres booked up

But if you are looking to get tested you may be out of luck.

Women’s College Hospital opens up for pre-registration every day at 6 a.m. but by 9 a.m. its 600 available appointments were already booked up.

The other hospitals in Toronto offering testing today also appear to be booked, with some of them not showing availability until Wednesday or Thursday.

Others only allow appointments to be set up to two days in advance and are similarly booked up.

In an interview with CP24 earlier on Monday, infectious disease specialist Dr. Isaac Bogoch said that the transition to an appointment-only testing model will help cut down on the large lineups and the “tremendous backlog” faced by Ontario’s labs but he said that it will also “create another barrier to getting a diagnostic test” for many Ontarians.

“A lot of people who might really truly need it might be dissuaded from getting a test because of this system and because it might take some time to book an appointment so there are certainly some drawbacks,” he warned. “It might also artificially lower what we are seeing as the number of new cases per day when we are really trying to track the burden of infection in the community.”