CAMBRIDGE, Ont. - Connor McDavid is set to enter the Ontario Hockey League at age 15 after being granted exceptional player status by Hockey Canada.

The teen from Newmarket, Ont., was named Greater Toronto Hockey League's player of the year after scoring 72 points (33-39) in 33 games this season.

He was also named MVP of the OHL Cup Showcase Tournament.

McDavid applied for the exceptional player status and passed through a special evaluation panel that assessed his level of maturity.

The OHL draft will be held April 7. 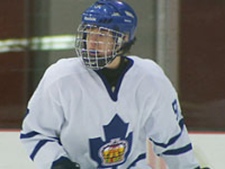 Connor McDavid, a forward with the AAA minor midget Toronto Marlboros, is pictured in this file photo. (TSN)