Messages of condolence for Jack Layton

NDP Leader Jack Layton has died after losing his second battle with cancer.

Born in Montreal, Layton moved to Toronto after he attended McGill University.

He became a Toronto city councillor before moving on to federal politics, eventually taking over the NDP and leading it to its best finish ever during last May's federal election.

"We deeply regret to inform you that The Honourable Jack Layton, leader of the New Democratic Party of Canada, passed away at 4:45 am today, Monday August 22. He passed away peacefully at his home surrounded by family and loved ones. Details of Mr. Layton's funeral arrangements will be forthcoming." 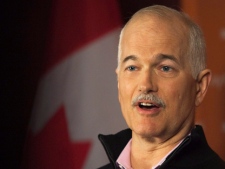 NDP leader Jack Layton talks with reporters during a campaign stop in Saint John, N.B., on Monday, April 25, 2011. The federal election will be held on May 2. (THE CANADIAN PRESS/Andrew Vaughan)