MISSISSAUGA, Ont. - It seems fitting that Hazel McCallion turns 90 years old on Valentines Day considering the love affair her community has had with the mayor since 1978.

The former pro hockey play is still known to keep a pair of skates and a hockey stick in the trunk of her car in case she comes across a pick-up game.

She easily holds the title as the oldest mayor in Canada and hasn't mounted a formal election campaign in years.

But McCallion does say this will be her last term.

She was a rookie mayor when a CP train derailed with tankers of hazardous chemicals forcing about 240,000 residents to flee their homes in November, 1979.

But her handling of the situation won her the confidence of her city's voters, a feeling that hasn't changed in more than three decades.

She is also known for being frank.

McCallion was hailed as a hero in 2006 during a police standoff involving a distraught man who was threatening to kill himself.

The five-hour standoff came to a peaceful end when McCallion appeared and demanded the man stand down so emergency personnel could attend to more important matters.

Mississauga is debt free, one of the best run cities, fiscally, in the country, something most other municipalities in the Greater Toronto Area can only look at with envy.

It's now the third largest city in Ontario and the sixth largest in Canada, with a population of 734,000. 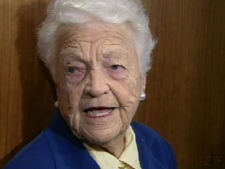 Mississauga Mayor Hazel McCallion reacts to the news of the murder of her close friend on Monday, Nov. 10, 2008.