TORONTO - A casual observer might think Toronto FC is a franchise on the decline.

Out of the playoffs, the team is set to close out another disappointing season. Passionate fan groups like the Red Patch Boys have been protesting instead of cheering. And the search is still on for a new coach and general manager after a recent housecleaning.

Yet the man in charge of Major League Soccer doesn't seem concerned. In fact, commissioner Don Garber is downright glowing in his praise of the franchise and its rabid fan base.

"MLS is where it is today because of the success of Toronto FC," Garber said Tuesday. "I have absolutely no doubt that we would not be in the position we are, which is a respected and credible, growing professional sports league . . . without the success of TFC."

Off the field, Toronto FC appears to have it all.

Sellouts are the norm at BMO Field, the team's followers are some of the most fervent in the country and deep-pocketed Maple Leaf Sports and Entertainment is running the show.

The business model is so strong that Garber said he has brought owners, investors and others to the city for a first-hand look at how the franchise operates.

"I can't tell you how many times we brought people up here," he said.

Garber went so far as to call the club "a model franchise."

Despite the success, Toronto FC continues to come up short on the field. The team will take a disappointing 8-13-8 record into Saturday's season finale at D.C. United.

And the fans' bitterness is starting to show.

That unrest was one of the main topics of discussion as Garber and MLSE executive Tom Anselmi held a media roundtable session as part of the buildup to the MLS Cup, slated for BMO Field on Nov. 21.

During Toronto FC's 2-2 draw with Columbus last Saturday, some groups of supporters elected to stay silent for the entire game to protest increases to ticket prices and the team's poor results.

Others booed while some fans wore green instead of the usual red. Signs that read "All For Money," and "Actions Not Words" were spotted around the stadium.

Garber chose to look at the positives, noting it showed the passion that exists and how it can serve as a motivating tool for the team.

"The opposite of love isn't hate, it's indifference," Garber said. "Part of the benefit of this is the fact that people care."

He added he was impressed that Anselmi and MLSE officials have already started meeting with supporter groups to listen to their concerns.

"I've been around sports for 30 years," Garber said. "Not many ownership groups go out and meet with fans when they're concerned about something."

Garber is also planning to attend a supporters' summit session in Toronto on the day of the championship game.

With Vancouver and Portland set to join the league in 2011 and Montreal on tap for 2012, Garber said the new teams can learn from a franchise that "wrote the book" on business operations and developing relationships with supporters.

"We didn't have the Red Patch Boys and groups like that before they came into the league," Garber said. "They created the supporter culture in Major League Soccer. That's pretty important and pretty historic.

'"Which is why I look at them and say, 'You've earned the right to tell the world that you can come and celebrate our championship game."'

NOTES: Garber said plans for the addition of a 20th MLS team could be finalized in the next year. Discussions are underway with a number of ownership groups in New York, and the league would like to add a team somewhere in the metropolitan New York area. ... The topic of potential changes to international and domestic player requirements for team rosters will be on the agenda at league meetings this week in New York. The MLS board of governors is expected to make a final decision by year's end. 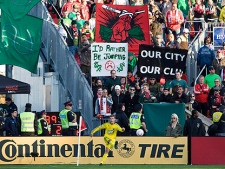