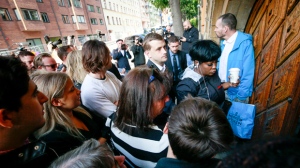 Renee Black, mother of ASAP Rocky, right, arrives at the district court in Stockholm, Thursday Aug. 1, 2019. American rapper A$AP Rocky pleaded not guilty to assault as his trial in Sweden opened Tuesday, a month after a street fight that landed him in jail and became a topic of U.S.-Swedish diplomacy. (Fredrik Persson/TT News Agency via AP)

STOCKHOLM -- American rapper A$AP Rocky is set to testify Thursday on the second day of a trial in Sweden, where he is accused of assault in an alleged street fight.

The trial has created a stir in U.S.-Swedish diplomatic relations after President Donald Trump weighed in on the case in support of the Grammy-nominated recording artist, whose real name is Rakim Mayers.

Mayers, who has been in custody since July 3, was brought in at the Stockholm District Court Thursday wearing an all-green inmates' outfit.

He is accused along with two other men believed to be members of his entourage of beating a 19-year-old man, Mustafa Jafari, in central Stockholm on the evening of June 30.

The rapper, 30, pleaded not guilty at the start of the trial Tuesday, saying he acted in self-defence.

Swedish prosecutors told the court on Tuesday that Jafari and a friend got into an argument with Mayers and one of his bodyguards near a fast-food restaurant where the rapper's entourage had eaten.

Prosecutors allege Mayers and the two others beat and kicked Jafari while he was on the ground, and that Jafari was hit with parts of or a whole bottle.

Thursday's court session is reserved for testimonies from the alleged victim, his friend, eye witnesses, Mayers' bodyguard and the rapper himself.

His mother, Renee Black, and several of his relatives were present in the courtroom.

The case has drawn the attention of American celebrities and Mayers' fellow recording artists, including Sean “Diddy” Combs and Justin Bieber. A social media campaign for his release, #JusticeForRocky, was created soon after his arrest.

Trump weighed in with a phone call to Swedish Prime Minister Stefan Lofven, offering to personally guarantee A$AP Rocky's bail, but the Swedish leader said he couldn't interfere in a legal case.

Sweden doesn't have a bail system and Mayers has stayed behind bars despite Trump's vouching for him. Trump has sent Ambassador Robert O. Brien, the U.S. special presidential envoy for hostage affairs, to Sweden to monitor the court proceedings.

Sweden government hasn't commented on O'Brien's attendance at the court but Adam Westin, reporter for Swedish newspaper Aftonbladet, said the U.S. official's presence is unlikely to have any impact on the case.

“I don't think it (O'Brien's arrival) has been treated as an insult,” Westin, who has followed the case closely, told The Associated Press.

Westin stressed that A$AP Rocky was jailed “because of the risk that he would leave the country and there is no bailing system in Sweden.”

If convicted, Mayers can be sentenced to up to two years in prison.