As 'Kimye' become Kim and Kanye, will it stay peaceful? 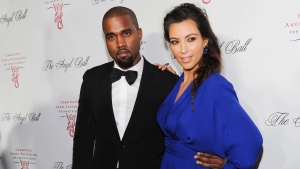 As “Kimye” becomes just Kim and Kanye with Kardashian filing for divorce Friday in Los Angeles Superior Court, they do so with a prenuptial agreement in place, independent fortunes and a desire to share time with their four young children.

The presence of the prenup means the couple likely kept much of their property - hers earned through reality TV and channeling her celebrity into several lucrative business ventures, his earned through music and fashion - separate during their 6 1/2 years of marriage.

“Where rich, productive people are getting married, the prenup will usually say that `My income stays mine and your income stays yours,”' said attorney Daniel Jaffe, a major player in Southern California's celebrity divorces for decades. “So if, in fact, that's the case, there won't be any major property issues.”

For the four children ranging in age from 7-year-old North to 21-month-old Psalm, Kardashian seeks joint custody in her divorce documents. That doesn't necessarily mean equal time or decision making for the nearly 16 years until all the kids are adults.

“There's a lot of wiggle room in the space between joint custody,” divorce attorney Reid Aronson said. “I know that I have cases where they say it's joint custody, but that's really just because the party that doesn't really have custody doesn't want to feel like they're being excluded.”

Neither Jaffe nor Aronson is involved in this divorce.

It will take at least six months by law for the couple to be declared divorced, but is likely to take longer to finalize given the finances and properties involved, even with an amicable split and a prenup.

Custody of minor children is never final. It's always changeable by the court, and the details are often worked out in separate legal processes long after the couple is declared divorced.

Despite the signs of peace, divorces often turn sour as they progress.

Any sign of strife will be seized on by a media hungry for details in what was among the most followed unions of the 21st century, and the couple will have to fight to keep the split from playing out publicly, as much of the final year of their marriage did.

Kardashian's lawyer Laura Wasser, the most sought-after attorney for divorcing celebrities with a constant stream of A-list clients, has used private judges often.

Yet strategic leaks can happen any time a client or their lawyer wants them, as has happened in the Pitt-Jolie divorce, which also got off to an amicable start but has dragged on with custody and child-support disputes.

Such leaks are a key way for divorces to be derailed.

“I would advise my clients to stay away from trying the case in the press, because that's where it really gets complicated, because if somebody says something that they don't like then the other person has to get back and respond,” Jaffe said. “So instead of doing this between lawyers or in a courtroom, what we have is an on Page Six where all the litigation is going to occur. And that's not helpful to amicably resolve these cases.”