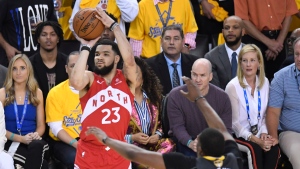 TORONTO -- Bell is apologizing for another technical problem that cut service to several thousand of its Fibe TV customers in crucial moments of an 2019 NBA Finals game -- this time the championship one.

The company attributes Thursday night's issue during the nail-biter moments, when the Toronto Raptors battled the Golden State Warriors to ultimately clinch the trophy, to "a malfunction in the hardware supporting the app."

Bell says service was affected for those using the Fibe app for several minutes in the fourth quarter but resumed about two minutes before the final buzzer.

The company says the glitch was similar to the one that caused Monday's outage, when several thousand Fibe customers using the app lost service for the final 30 seconds of Game 5 in the Finals.

In both cases, customers took to social media to voice their anger.

Bell says affected customers this time around included subscribers to Alt TV, a new live TV service based on the app that requires no receiver, and Fibe TV customers who would use the app to watch on devices other than their TV, such as smartphones or tablets.

"We disappointed these customers and we sincerely apologize to them," spokesman Nathan Gibson said Friday in an emailed statement to The Canadian Press.

"We'll make it right for them."

Gibson adds Fibe TV and Bell Satellite TV customers watching on television with their receivers were not affected, which amounts to about 2.8 million subscribers nationally.

The outages were "unprecedented," he added, noting their network team is analyzing the problem with their equipment supplier.

-CP24 is a division of Bell Media