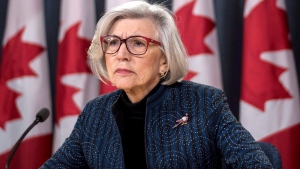 Outgoing Chief Justice of the Supreme Court of Canada Beverley McLachlin listens to a question during a news conference on her retirement, in Ottawa on Friday, Dec. 15, 2017. THE CANADIAN PRESS/Justin Tang

While she may have been awarded a $25,000 prize for political writing on Wednesday, former Supreme Court justice Beverley McLachlin doesn't see herself as a political person -- at least not in the colloquial sense.

As Canada's longest-serving chief justice, and the first woman to hold the position, McLachlin felt it was her duty to steer clear of the parliamentary fray in order to uphold the principles of judicial independence.

Still, jurors for the Shaughnessy Cohen Prize say McLachlin's winning memoir, “Truth Be Told: My Journey Through Life and the Law,” is “essential reading for anyone interested in the intersection of law and politics in Canada.”

“I think political should be read, and probably is for this prize, in the broad sense of how we govern ourselves,” McLachlin said by phone from Gatineau, Que.

The tension between law and politics is in the headlines as U.S. lawmakers lock horns over the fate of late Justice Ruth Bader Ginsburg's Supreme Court seat.

U.S. President Donald Trump and Senate Republicans are charging forward with plans to fill the court vacancy over Democrats' objections that the decision should wait until voters have their say in the Nov. 3 election.

The power struggle is part of what many legal scholars see as the growing polarization of the American judiciary along partisan lines.

McLachlin, who received appointments from both Liberal and Conservative politicians, said she couldn't see such division playing out over a Canadian court pick.

“(In the U.S.), there is this deep division between right and left, and different values and different ideals, and some justices are seen to epitomize one side and the other,” she said. “We don't have anything like that in Canada. You can't point to a judge who would be a Liberal or Conservative in any real sense.”

As throngs of admirers mourned Ginsburg at the U.S. Supreme Court on Wednesday, McLachlin hopes the rancour surrounding her replacement won't distract from her legacy as a formidable jurist and champion of women's rights.

In “Truth Be Told,” published by Simon & Schuster, McLachlin recalls meeting Ginsburg in Gatineau as part of a cross-border judicial exchange in the early 2000s.

“Ruth Bader Ginsburg wasn't just going to be content with chit chat,” McLachlin tells The Canadian Press. “She leaned over to me at the table and she said, 'Now, what is the history of women's rights in Canada?”'

McLachlin told Ginsburg about the Famous Five activists, who fought for women to be legally recognized as persons in Canada.

“She was just fascinated. That was her passion,” said McLachlin. “She was a very serious woman, and cared deeply about equality and advancing the rights of women.”

McLachlin's decision to write a memoir about her upbringing in Pincher Creek, Alta., and time on the bench marked another break with tradition in a decades-long career full of firsts.

The 77-year-old said she needed some convincing to puncture the veil of judicial mystique.

But ultimately, McLachlin decided to tell her story in hopes that she could help others and perhaps humanize the court.

“We do wear robes, we sit on a bench, and there is authority of the state behind what a judge finally decides. But we are human beings who are doing a job for society,” she said.

“I wanted people to know that judges do understand, and that their own experiences .... infuse their approaches and their thinking.”

McLachlin feels it's important that the courts represent a breadth of human experiences.

In recent months, the Black Lives Matter movement has put a spotlight on the lack of diversity in the Canadian judiciary, including the Supreme Court, as part of a broader reckoning with racism in the justice system.

“I know that everyone wants to make the court much more diversified,” said McLachlin, adding that she expects to see an Indigenous judge appointed to Canada's top court in the “near future.”

“It should be more diverse. And I am certain that we are going to get there, but it's not something you can do immediately.”

The Writers' Trust of Canada announced McLachlin as the winner of the Shaughnessy Cohen Prize for political writing at a digital edition of its Politics and Pen Gala on Wednesday evening.

- Adam Chapnick for “Canada on the United Nations Security Council: A Small Power on a Large Stage,” published by UBC Press.

- Harold R. Johnson for “Peace and Good Order: The Case for Indigenous Justice in Canada,” published by McClelland & Stewart.

- Jonathan Manthorpe for “Claws of the Panda: Beijing's Campaign of Influence and Intimidation in Canada,” published by Cormorant Books

The Shaughnessy Cohen Prize is handed out annually to a literary non-fiction title capturing a political subject of relevance to Canadian readers with the potential to shape or influence thinking on political life within the country.

This report by The Canadian Press was first published Sept. 23 Date, 2020.