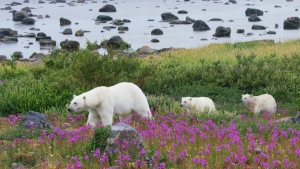 A female polar bear leads her two cubs through a patch of colourful fireweed in a handout photo. During summer, with no sea-ice to hunt on, polar bears in this area are restricted to the shores of Hudson Bay in Canada. THE CANADIAN PRESS/HO-BBC Earth MANDATORY CREDIT

For most polar bears, the summer months are typically lean without access to the winter sea ice they rely on to hunt.

But a group of them around Seal River in northern Manitoba's Hudson Bay region have found what experts are calling an “ingenious strategy” to find a meal in the hotter weather.

As the new series “Seven Worlds, One Planet” shows, polar bears there patiently wait on boulders for pods of beluga whales to come in with the tide and then jump on their backs to hunt them.

Chadden Hunter, an Australian wildlife biologist and filmmaker who is a producer on the series, says such behaviour hasn't been studied and wasn't reported on until recently.

He says it's “quite unusual,” as polar bears typically just come ashore during the summer, sleeping and conserving their energy while they wait for the cold weather to return.

He adds the discovery could help experts understand what polar bears might need to do more of in the future, if they're going to survive longer and hotter summers.

“What we might be witnessing with this amazing behaviour that we filmed in Hudson Bay is the kind of thing that would enable some groups of polar bears to survive as climate changes,” says Hunter.

“We can't say that they're doing it directly because of climate change, but there really is an interesting question here about the future.”

Premiering Saturday on BBC Earth, “Seven Worlds, One Planet” has stunning footage from 41 countries in seven continents, with a crew of 1,500.

Renowned nature documentary broadcaster David Attenborough narrates the series, which showcases animal behaviour on each continent and the impact of humans on the planet.

Canada will be featured in the Jan. 25 North America episode, which shows the polar bears north of Churchill, Man., in summer 2018.

As Hunter explains, polar bears lose about a third of their body weight when they're unable to hunt on winter sea ice in the summer.

But the summertime polar bears around the remote Seal River area have learned to wait for up to six hours on top of giant rocks for beluga whales, which come into the river mouth with the tide and their calves to exfoliate their skin on the boulders.

The bears then leap onto the backs of the whales at just the right moment in an attempt to get a big summer meal. As a result, they're fatter and healthier than polar bears usually are in the summer.

“When we were filming this behaviour, a lot of scientists couldn't believe that it was happening,” says Hunter, who is based in Bristol, England, which is known as “the Hollywood of wildlife filmmaking” for its slew of nature shows.

“There was absolutely no records in scientific papers, there was no studies on it, and a lot of scientists are champing at the bit to get into this Seal River area to study this group of polar bears to see if they can study the behaviour more.”

Hunter and his crew achieved such footage using a drone and a small boat with a stabilized camera on the end of a crane arm.

They also used boats to capture fascinating footage of bears in another region of Canada: Tofino, on the western shore of Vancouver Island.

There, we see a subspecies of black bears from the rainforest that have learned to wait for low tide for a rich source of seafood, including fresh crabs underneath massive boulders.

Cameras capture a mother black bear teaching her mischievous young cubs in the springtime how to roll over the boulders to get to the food.

“They're actually a real seafood connoisseur, if you like,” says Hunter.

Production crews had to trek on snowshoes through dense spruce forests in Yukon, carrying all their equipment, to capture the dramatic footage over a period of weeks.

“It was really brutal work,” says Hunter. “But when you finally get that face-to-face experience with wild lynx in Yukon, it's just one of the most powerful wildlife experiences that I've ever had, to see such an elusive and evocative animal.”

Hunter has been filming wildlife around the world for a few decades.

He feels Canada is a rich resource of “spectacular animal behaviour that's never been filmed before.”

“It's so vast and it's really quite undeveloped, which is wonderful, and has unbelievably rich wildlife in very spectacular settings,” Hunter says.

“The latitudes that it stretches, almost to the North Pole and right down to warmer weather - you get everything from your firefly spectacles to your beautiful prairies with the bison and the prairie dogs. And so it's just a place that we keep coming back to.”