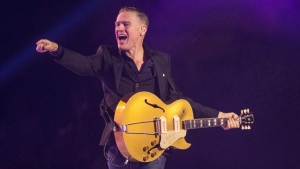 Canadian rocker Bryan Adams' online rant that blames the spread of COVID-19 on Chinese meat markets exacerbates harmful stereotypes and disinformation, says an expert on racism in the time of epidemics and pandemics.

In an Instagram post on Monday, Adams bemoaned the cancellation of his tour “thanks to some (expletive) bat eating, wet market animal selling, virus making greedy bastards.”

Many on social media condemned Adams' comments as racist, saying he was contributing to anti-Chinese rhetoric surrounding the virus.

He apologized on Tuesday, saying he only wanted to post about animal cruelty.

But Carmen Logie, associate professor in the University of Toronto's Factor-Inwentash Faculty of Social Work, says the “Summer of '69” singer's remarks can lead to hurt, “othering and stigma.”

Such finger-pointing can also make some people think they're less affected by the virus, she added.

“Seeing somebody who has such a platform actually promote such hatred and stereotypes is really shocking,” Logie said Tuesday in a phone interview.

“You see other platforms, such as Tom Hanks and people who've had coronavirus, be really supportive and positive and promote information, testing. They use their platform in ways that advance public health.

“But for (Adams) to be so negative and say some harmful things is very disappointing.”

The Kingston, Ont.-born singer-songwriter - who gained fame in the '80s with hits including “Run To You” and “Cuts Like a Knife” - apologized “to any and all that took offence to” his post.

He said he just wanted to rant about “animal cruelty in the wet-markets being the possible source of the virus, and promote veganism,” which is a diet he's had for decades.

He added he has “love for all people,” and posted a video of himself singing his single “Into the Fire.”

Wet markets sell everything from meat to produce and animals. The outbreak was first reported in the central Chinese city of Wuhan, and initially linked to such a market.

Some conspiracy theorists and U.S. President Donald Trump have also floated unproven theories that the virus was created in a lab.

Adams' post was a much different tone than his uplifting performance of “Shine A Light” on last month's “Stronger Together, Tous Ensemble” broadcast benefit to support those on the frontlines of the pandemic.

While some expressed support for the singer online, others accused the 60-year-old of losing sight of the true victims of a pandemic that has claimed hundreds of thousands of lives worldwide.

“It is not my intention to 'go at' or 'cancel' anyone, but to identify posts like this that condone and enable acts of hate and racism. It runs counter to everything I love about Canada,” Chinese-Canadian actor Simu Liu wrote on Twitter.

“I hope Bryan does better for the millions who look up to him like I do. #BummerOf69.”

“By saying people are bat-eating, animal-selling greedy bastards - there's no way that is an accurate portrayal of anybody. You're combining stereotypes about a group of people,” said Logie, a Canada research chair in global health equity and social justice with marginalized populations at U of T.

“I was reading from a lot of scientists ... that this virus was not made. So just the fact that he said 'virus-making greedy bastards,' it doesn't even make sense.”

Racism and xenophobia have been aimed at the Asian community since the beginning of the COVID-19 crisis, Logie said, noting it's a recurring narrative throughout history.

“When we have an epidemic, we blame people who we consider foreign,” Logie said.

Such finger-pointing promotes inequality and affects people's well-being and mental health. And it does nothing to stop the spread of virus, she added.

“We don't need somebody who could be a role model, who is a very successful, wealthy person, promoting this hatred,” Logie said.

“These aren't just words; they actually have serious impact on promoting stereotypes, on hate crimes, on people avoiding particular people's businesses, and therefore impacting their livelihoods. And it can cause fractions in our society.”

Name-calling is not an effective public health strategy, Logie added.

This report by The Canadian Press was first published on May 12, 2020.