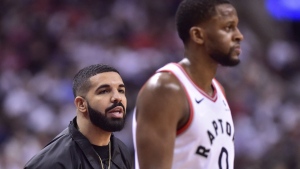 Canadian rapper Drake looks from courtside as the Toronto Raptors take on the Washington Wizard during first half game five of round one NBA playoff basketball action in Toronto on Wednesday, April 25, 2018. THE CANADIAN PRESS/Frank Gunn

TORONTO -- With his team pulling away in the fourth quarter of a pivotal playoff contest, Nick Nurse was standing by the broadcasters' table and applauding the previously struggling Raptors bench players that had given Toronto a 99-82 lead in Game 4 of its NBA Eastern Conference final against the Milwaukee Bucks.

That's when rap superstar and Raptors superfan Drake left his courtside seat to give the Toronto coach a quick shoulder massage.

Nurse tried hard to act like he hadn't noticed. He claimed on a media conference call on Thursday that he didn't even know he got it until someone showed him a picture of it.

"I didn't even feel it. I was so locked into the game," Nurse said.

However, it seems like everyone else watching the game saw it, and of course social media debates were waged. Did Drake cross a boundary with his act of bonhomie, or were his actions an acceptable part of the NBA's celebrity-driven culture?

The move was in blatant disregard of the NBA's fan conduct policy, which the Raptors faithful at Scotiabank Arena are lectured on via a jumbotron video several times per game.

But Drake is no ordinary fan. Love him or loathe him, he's an entertainment icon who has used his celebrity to put his hometown on the map. The Raptors, desperate to harness his star power, even made up a job for him back in 2013, granting him the ceremonial title of "global ambassador."

What comes with that vague position? On one hand, he has lent his powerful OVO brand to the team, with his signature black-and-gold colour scheme decorating one of the team's alternate jerseys -- as well as the Scotiabank Arena court during the Raptors' "Drake Night" promotions -- and his owl logo adorning the team's practice facility. On the other, it seems to involve trolling opposing players, hollering at referees and acting as a part-time masseur.

Drake seems to be even more animated in these playoffs, on his feet for most games and taking direct aim at the opposition's superstars with mocking gestures.

"There's certainly no place (on the court) for fans and, you know, whatever it is exactly that Drake is for the Toronto Raptors," Bucks coach Mike Budenholzer told reporters on a conference call Wednesday. "You know, to be on the court, there's boundaries and lines for a reason, and like I said, the league is usually pretty good at being on top of stuff like that."

Although Drake has not explicitly spoken on the issue, he did like a fan's comment about all the complaints and then screencaptured the comment and put it on his Instagram story on Wednesday night.

"Sports media needs to accept the simple rule the Miami Hurricanes signed into law back in the 80s: if you don't want the opposing team to celebrate and dance, prevent them from scoring, winning, or achieving their objective. Get over it and keep it moving."

Other teams have celebrity fans -- the Los Angeles Lakers are the beloved team of actor Jack Nicholson while director Spike Lee has lived and died with the mercurial New York Knicks -- but none seem as polarizing as Drake. Whether his courtside actions are innocuous or obnoxious, they are always a talking point.

A few playoff highlights include:

Even if Drake's courtside attire at Raptors games often channels high-school gym teacher rather than entertainment icon, he commits to his look. And apparently, that means no lint. While not one of his more demonstrable antics, cameras caught Drake using a lint roller on his pants during Game 2 of Toronto's first-round series with Brooklyn in the 2013-14 playoffs. The clip went viral, and the team gave away Drake branded lint rollers before Game 5. One of the lint rollers was famously sold on eBay for over $55,000 in 2014.

Game 1 of the 2017-18 Eastern Conference semifinals was a dark time for the Raptors. The team has just lost their series opener in overtime to bete noire LeBron James and his Cleveland Cavaliers despite leading for much of the game. An agitated Drake had a heated confrontation with Cavaliers centre Kendrick Perkins after the game which included plenty of colourful language from both parties. The NBA reportedly warned Drake to tone down his antics after the incident.

You could forgive Joel Embiid for enjoying the moment. The star Philadelphia 76ers overcame injuries and a rogue digestive system to drop 33 points on the Raptors in Game 3 of this season's conference semifinal between the teams. Embiid engaged in all manner of celebrations throughout his big game, including spreading his arms and running around like an airplane in flight. When Embiid came back down to Earth and the Sixers dropped Game 5 in Toronto, Drake mocked Embiid with an airplane celebration of his own. Embiid took the ribbing in stride, telling Drake "I'll be back for Game 7."

GOING AT THE GREEK FREAK

Before this East final, Milwaukee radio station 103.7 KISS-FM invoked a moratorium on playing Drake's hits, calling the rapper a "big smack-talker on the basketball court." And so far Drake has not disappointed. When Bucks behemoth Giannis Antetokounmpo fouled out in overtime of Game 3 after being shut down by Raptors superstar Kawhi Leonard, Drake waved a sarcastic goodbye to the MVP candidate as he left the court. Drake was even more animated in Game 4, laughing as Antetokounmpo bricked a free-throw attempt and punctuating his mirth with an exaggerated windmill motion with his arm.